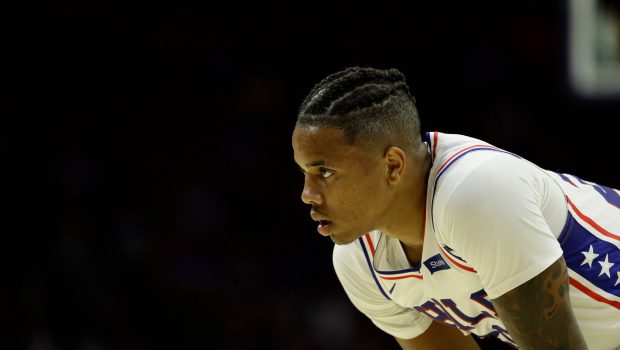 SIXERS FULTZ HAS — AND IS! — A PAIN IN THE NECK, OUT INDEFINITELY!

The Sixers have announced that Markelle Fultz, their second-year guard drafted with the No. 1 overall pick in 2017, is out indefinitely with what has been diagnosed as a nerve disorder.

In other words, the talented 20-year old has what he has become to Sixers Nation:

A pain in the neck!

Fultz hasn’t played since Nov. 19. He also missed 68 games last season. In a statement updating Fultz’s status yesterday, Dr. Daniel Medina, the Sixers’ vice president of athlete care, said that after a series of consultations with specialists across several disciplines, Fultz had received a diagnosis of thoracic outlet syndrome.

A statement provided to ESPN by Fultz’s agent, Raymond Brothers, went further, saying that the diagnosis was neurogenic thoracic outlet syndrome, which Brothers said “affects nerves between the neck and shoulder resulting in abnormal functional movement and range of motion, thus severely limiting Markelle’s ability to shoot a basketball.”

The team and agent both said Fultz’s condition would be treated with physical therapy, and ESPN’s report indicated Fultz could be back on the court in three to six weeks.

This condition, which the Mayo Clinic says involves a compression of the brachial plexus, “a network of nerves that come from your spinal cord and control muscle movements and sensation in your shoulder, arm and hand,” is typically more associated with baseball players. A host of big-name pitchers, including Matt Harvey, Josh Beckett and Chris Carpenter, have received a similar diagnosis. In perhaps that sport’s most famous case, J.R. Richard, an all-star pitcher for the Houston Astros, had his promising career ended by what was described as vascular thoracic outlet syndrome and a subsequent stroke that was attributed to the condition.

In Fultz’s case, a diagnosis of an actual physical ailment, even a serious one like this, could be a step forward for his career, as it could clear up the perception that his struggles were a confidence problem — “the yips” — rather than an injury.

The Sixers traded up in the draft to select him, giving the Boston Celtics the No. 3 pick in the 2017 draft, and a future first-round pick in exchange for the No. 1 pick.

The problems for Fultz on the professional level were immediately apparent. He showed up to his first training camp with a reworked shooting form that was widely mocked. After just four regular-season games, in which he went 9 for 27 from the field and did not attempt a 3-pointer, he was shut down for five months. His status in that time was highly guarded, with conflicting reports about injury diagnoses and potential mental hangups, many of which focused on the health of his shoulders.

Fultz was able to play in the final 10 games of the regular season, and in three playoff games, and while he attempted just one 3-pointer (which he missed), the perception coming into the season was that his struggles could be behind him.

Instead, in 19 games, 15 of which he started, Fultz shot 41.9 percent from the field and went just 4 for 14 from 3-point range. The Sixers had started to minimize his role on the team before he was shut down with the mysterious injury.