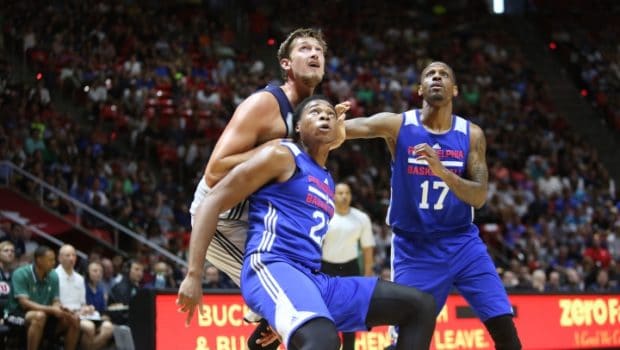 Coach Brett Brown had to like the way the summer Sixers played defense last night against the Jazz in a convincing 86-75 win.

“Our defense was great,” said Billy Lange, the Sixers’ fourth-year assistant who guided the team through the Utah summer league. “I thought it started in the fourth quarter of the San Antonio game.”

Lange was referring to the final period of the Sixers’ 95-91 loss Tuesday, in which the team gave up just 12 points over the final 10 minutes of regulation.

Last night, tied at 43 at halftime, the Sixers clamped down. They spotted the Jazz 16 points in the third quarter, then yielded a paltry nine points in the fourth. Between the the last two periods of the game, Utah generated only eight field goals.

“Definitely, that was the mentality coming into this game, just win,” said Ben Simmons, who made his second summer league appearance. He sustained calf cramps in Monday’s 102-94 defeat to Boston.

“Just go on the defensive side, and play hard,” Simmons said of the focus he brings into games. “That’s the thing I really look at.”

“I think the most important is to play defense, and play as a team,” said Luwawu-Cabarrot, who tallied nine points (3-9 fg) and six rebounds versus the Jazz. “If you play defense, everybody is going to cheer for each other, cheer the game. Even if we just fight until the end and we lose, if there is fight, it’s a good game for us.”