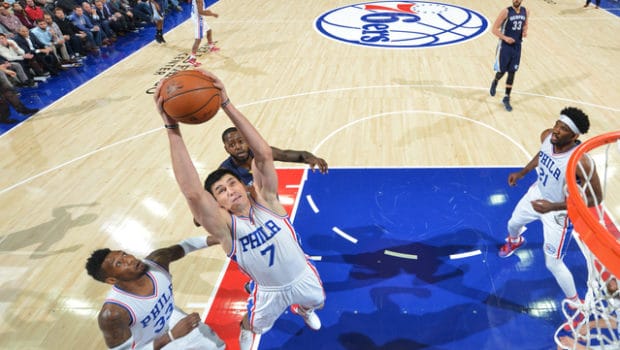 There would be no Sixers three-peat!

Marc Gasol scored 27 points, Mike Conley had 25 and the Grizzlies beat the Sixers 104-99 last night at the Wells for their sixth straight victory.

Conley added nine rebounds and nine assists for the Grizzlies, who came back from an 11-point, second-half deficit for their eighth consecutive win against Philly.

Ersan Ilyasova (above) had 22 points and 12 rebounds for the Sixers, who were looking for their first three-game winning streak in nearly three years. The 76ers had their four-game home winning streak snapped.

Joel Embiid had 12 points and 11 rebounds but didn’t play in the second overtime. The rookie center is on a minutes restriction after missing the last two seasons with a foot injury. He finished with 27 minutes.

“There’s a human side to all of this,” Sixers coach Brett Brown said. “There it is 10 feet from you. It’s tempting but not wise. That’s the discipline we have to have.”

Embiid lobbied to enter in the second overtime but was denied.

“It was frustrating but those guys care about me and are looking out for me,” he said.

Asked if he was looking forward to having free rein with his minutes, Embiid said, “I can’t wait for that day to come.”

Zach Randolph scored the first four points of the second overtime to give Memphis a 95-91 lead. Philadelphia cut it to 99-98 after Jerryd Bayless’ layup with 23 seconds remaining. Conley’s two free throws pushed Memphis’ lead back to three and Philadelphia never got closer.

“When you get to April, these are the games you look back on,” Memphis coach David Fizdale said. “You preach to your team they have another level to go to. It becomes habit.”

The teams were a combined 1 for 11 from the field in the first OT before Randolph put Memphis ahead 91-88 with 49 seconds left when he converted over Embiid on a drive. Bayless tied it with a 3 from the top of the key with 43 seconds left before Conley’s turnover gave the Sixers the ball back.

Bayless misfired on a midrange shot that would’ve won it, and Embiid couldn’t convert on a baseline jumper after an inbounds play with 1.3 seconds left.

Embiid had the final shot of regulation, but his over-the-head try against the defense of Gasol went off the backboard.

“I don’t know if I’m going to get fined for this but I thought I got fouled,” Embiid said.

“You know you’re going to have a tough night, no matter what, because they don’t stop playing until that final whistle,” Conley said. “They scrap and claw for every little bit. We’re thankful to get away with a win tonight.”

Of Embiid, Fizdale said, “The whole league will have to deal with him a long time. He’s a special, special talent.”