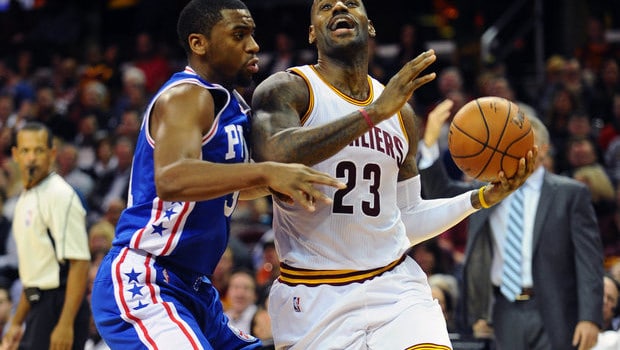 If you watched the Sixers-Cavs game last night there was plenty to entertain a Philly fan:

Twin Towers Nerlens Noel and Jahlil Okafor each scored 18 points for the Sixers.

And Philly scored seven points in the final 32 seconds of the first quarter, including a dunk and a 3-pointer by T.J. McConnell.

But as usual for the now 0-5 Sixers, that wasn’t enough, especially against All-World LeBron James and the Cavs.

James scored a season-high 31 points, including his 9,000th career field goal, and the Cavs recorded their fifth straight victory, 108-102.

James remained in the game after taking a hard fall driving to the basket early in the fourth quarter. He was on the court for a couple of moments and limped to the bench after being checked by a trainer. James was pulled with 2:31 remaining and Cleveland (5-1) leading 104-90.

James, who scored 18 points in the third quarter, reached his latest milestone with a dunk late in the second quarter to become the 20th player in NBA history — and fifth active — to record 9,000 field goals.

James took over in the third quarter when he hit three 3-pointers as the Cavaliers turned a 50-49 halftime deficit into a 16-point lead. James came into the game shooting 2 of 18 from beyond the arc.

Richard Jefferson scored 17 points while Mo Williams added 16 for Cleveland, which hasn’t lost since the season opener against Chicago.

Cleveland’s fast start has come despite a series of injuries. James received an anti-inflammatory injection in his back in training camp, but has played in every game in the regular season.

Cavaliers power forward Tristan Thompson left the game late in the first quarter after sustaining a cut on his right eyelid. He received stitches and returned a minute before halftime.