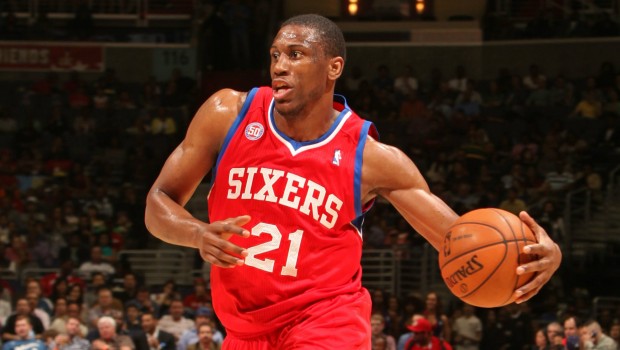 SIXERS FANS WILL WELCOME BACK THAD YOUNG AT WELLS TONIGHT

Notwithstanding a recent surge of good play, spurred by a stiff defense that has led to a spate of victories, the Sixers haven’t given their stalwart fans much of a reason to cheer this year.

That changes tonight, as the Sixer faithful will be putting their hands together to welcome back one of their faves, Thaddeus Young.

After developing into a productive forward in seven seasons with the Sixers, Young has given the oft-depleted Minnesota Timberwolves a reliable presence in the lineup.

Making his first trip back to Philly, Young will try to extend his best stretch of the season away from home when the NBA-worst Wolves seek their first back-to-back victories.

Young, selected 12th overall by Philly in 2007, averaged double-digit points in six straight seasons and emerged as the 76ers’ leading scorer in 2013-14 with a career-best 17.9 per game.

That made Young an attractive piece in the August three-team trade that sent him to Minnesota and Kevin Love to Cleveland. The Wolves also acquired 2014 top pick Andrew Wiggins and 2013 first overall pick Anthony Bennett from the Cavaliers.

Ricky Rubio, Kevin Martin and Nikola Pekovic have sat out extended periods due to injury, but Young hasn’t missed a game since Nov. 22 and his 40 starts are second only to Wiggins’ 45.

Young has been at his best on the road of late, averaging 22.0 points on 50.7 percent shooting in his last four games.

Wiggins, tops on Minnesota with 15.1 points per game, has scored 13 or less in four of his last six after averaging 21.4 over the previous 13.

The Timberwolves (8-37) have Martin and Pekovic back, while Rubio and Shabazz Muhammad are nearing a return. Mo Williams, who had a 52-point game earlier this month, could play after he missed Wednesday’s game for personal reasons.

Michael Carter-Williams finished with 20 points, nine rebounds and nine assists in that contest. He had 14 points, 10 assists and nine boards Wednesday after missing one game due to an upper-respiratory infection as the 76ers (9-37) ended a six-game slide with an 89-69 home win over Detroit.

“His presence on the court and (his) size … that’s a special quality for a young point guard,” coach Brett Brown told the team’s official website.

The 76ers, averaging a league-low 89.5 points, haven’t scored 100 in their last 23 games. They’ve likely lost leading scorer Tony Wroten for the season as the guard plans to undergo surgery on his partially torn ACL.

Minnesota ranks near the bottom of the league with 107.0 points allowed per game but has given up 98.4 in its last five.

Philly seeks back-to-back home victories for the first time since winning its first two there last season. However, it has dropped the last two visits from the Wolves by a combined 48 points.