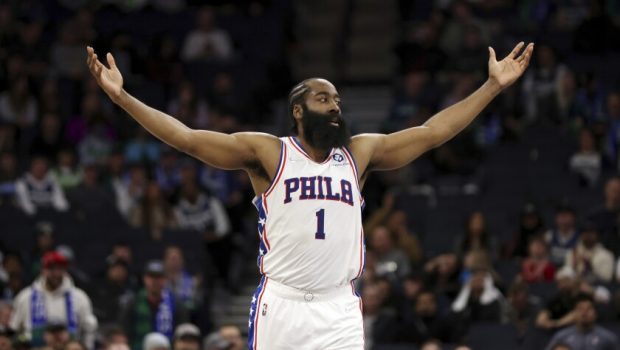 SIXERS FANS WILL RAISE THE ROOF TONIGHT FOR JAMES HARDEN!

It’s been almost three weeks since James Harden was traded to the Sixers for Ben Simmons — 20 days to be exact — and Philly fans haven’t been able to see Joel Embiid and Harden play in person.

Only on TV in blowout wins over the Wolves and the Knicks.

But tonight at the Wells, 20,000-plus will welcome the man who has been on everyone’s mind as the last key to send the Sixers to an NBA title.

According to the Associated Press, cheap seats start at $100 on the secondary market.

“It’s going to be turnt in there,” Harden said over the weekend, “and I’m ready for it.”

The AP reported that Harden was the last Sixer off the court after Tuesday’s practice, sharing laughs with All-Star center Joel Embiid and jamming to music during shooting drills with assistant coach Sam Cassell.

Harden had 27 points, 12 assists and eight rebounds in his debut against Minnesota and followed with 29 points, 16 assists and 10 rebounds against the Knicks.

Harden seems recovered from the left hamstring issue that sidelined him his final games in Brooklyn and his first games in Philadelphia (37-23, third in the Eastern Conference).

Harden joked over the weekend he was still “winging it” on offense, but not at the free throw line.

Embiid and Harden are first and third in the NBA in average free-throw attempts. Embiid made a career and NBA season-high 23 free throws against the Knicks.

Embiid, scoring 29.8 points per game and averaging 11.1 rebounds, says the best times with Harden are ahead.

“What are you really going to do? He’s a great passer and, obviously, (I’m) someone that attracts a lot of attention, too,” Embiid said. “You’ve got to make a decision. Do you stay on me or do you stay on him?”