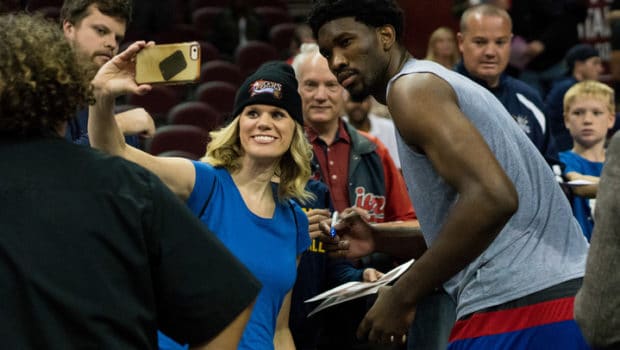 SIXERS FANS AGREE THAT JO JO EMBIID WAS WELL WORTH THE WAIT!

If the question is:

Was Sixers’ rookie Joel Embiid worth the two-year wait, the answer is yes!

In a preseason game against the NBA champion Cavaliers last Saturday, Embiid threw down a tomahawk dunk 35 seconds into the first quarter, then swatted 5-9 Cavs rookie Kay Felder’s layup attempt, making him look even smaller, later drained a 26-foot 3-pointer, impressive for a 7-2 center.

Embiid is showing Sixers fans and critics alike that he was well worth the wait. The No. 3 pick of the 2014 draft would have been No. 1 if not for the broken navicular bone in his right foot, and, after missing two full seasons, he appears ready to help Philly immediately. He might even be the favorite to win Rookie of the Year.

There are several other questions hanging over the Sixers’ season: Will president Bryan Colangelo clear up the frontcourt logjam with a trade or two? Will Ben Simmons come back from his broken foot to contribute as a rookie? Can Jahlil Okafor show that he can defend, rebound and pass at the NBA level, even a little bit? None of these things, though, matter nearly as much as how Embiid’s season goes.

Regardless of the Sixers record, if Embiid stays healthy and looks like a future franchise player, this year will be a success. It’s way too early, though, to know whether or not there are more setbacks to come.