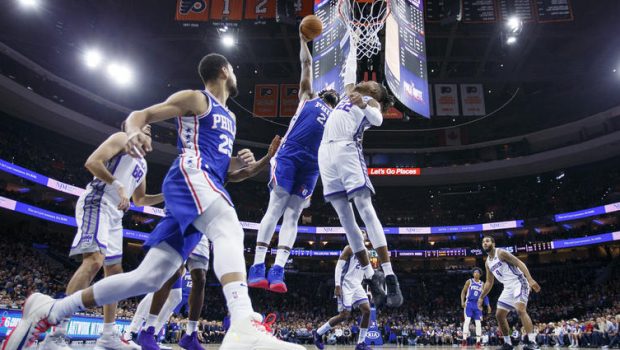 SIXERS EMBIID HAS GOTTEN MORE PHYSICAL SINCE HIS 0-FOR 11!

“You know, since the Toronto game, I kind of changed my mindset about the whole season,” Sixers Joel Embiid said. “I had not been as aggressive as I was last year. The last couple games, it was just being aggressive, being more physical, creating the contact, causing whoever is guarding me to react to it.”

“That Toronto game” was the Sixers loss a week ago tonight in which Embiid shot 0-for-11 as Philly fell 101-96 in Canada.

Consider it a wake-up call.

“That is a disposition, a mentality to me, more than a stat,” Sixers coach Brett Brown said. “Joel Embiid has a distinctive mentality. None of us can underestimate the hurt he felt after the Toronto game. He felt like he let us down, and we have seen him respond.”

After Friday’s 101-95 road win over the New York Knicks, and back in Philly Embiid notched his third straight game with 20 or more points and double-digit rebounds, and his 12th double-double of the season.
Tobias Harris, who had 22 points overall and 14 in the fourth quarter alone, said Embiid’s intensity rubs off not only on fans but on teammates, too. “We’re best when Joel is that aggressive,” Harris said. “He’s a beast. You can’t guard him down there. You either foul or hope he misses it, and that’s about it.”
Click Here To Comment
0 admin December 2, 2019 Sixers