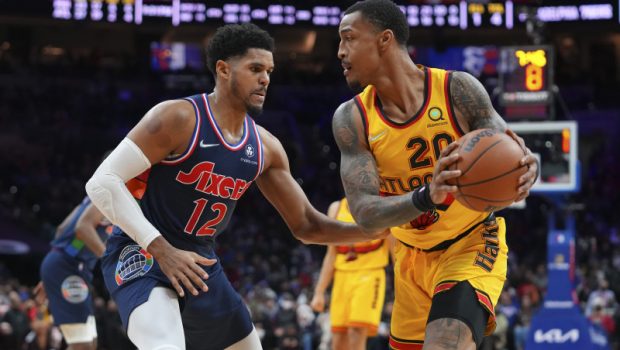 The Sixers are busy rearranging their roster, which came up woefully short in their second-round exit from the playoffs.

Tobias Harris was especially to blame, since his mediocre performance didn’t measure up, and he constantly gave up the ball in crunch time.

Here’s a mock trade from Bleacher Report that Sixers fans would love:

Tobias Harris is owed $37.6 million next season and $39.3 million for the following campaign, per Spotrac. That’s (at best) a debatable amount for a player of his talent level, but it’s an indefensible sum of money for someone in his role.

With Embiid leading the charge, Tyrese Maxey rapidly climbing the ranks and Harden arriving at midseason, Harris dropped to fourth on the offensive pecking order. NBA budgets might be super-sized, but even they can’t accommodate that kind of coin for a fourth option.

Here, Philly would transform Harris’ bloated salary into John Collins’ more manageable $23.5 million at the not insignificant (but not egregious) cost of Matisse Thybulle’s pesky perimeter defense. More would have to be added to the exchange to pass the salary-matching requirements, but this would be the trade’s foundation.

While a Collins-vs.-Harris debate might come down to the eye of the beholder, the fact Philly could get similar production from the 4 spot at a fraction of the cost might be too good to pass up.