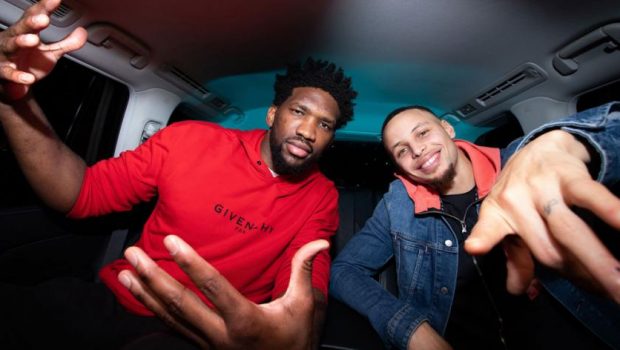 The Sixers host the Warriors tonight at 8:30 on ABC.

Especially Stephen Curry who is chasing a 3-point record, but found time to soften up Sixers center Joel Embiid.

“He’s super talented, physical with his presence, it seems like the control of his game, his decision-making, in terms of how he’s getting his points has evolved every year. You have to just be disciplined all game knowing he’s still going to get his numbers, as long as you make him work, don’t give him easy ones, keep him off the foul line, any great player like that, you’ll take your chances.”

“Playing against Joel is like going into a time machine,” said Warriors coach Steve Kerr.

“It’s like playing against Patrick Ewing or Shaq or Hakeem Olajuwon, it’s a low post-game. He will step out and shoot 3s and run some DHOs and he’s good with that, but he’s one of the few guys in the league now who can dominate a game from the low block and they’ve done a great job with their roster. Putting a lot of shooting around him.”

“Doc (Rivers) does a great job just making you guard everyone, putting you in tough spots where you have to make decisions, and leave some people open potentially,” Kerr continued. “So a very difficult cover and we definitely have our hands full.”

“If he gets everything and gets to the foul line and gets the putbacks and easy stuff and you break down, that’s where you get in trouble,” Steph Curry added. “You just gotta stay disciplined. It’s not just on Loon (Kevon Looney), Draymond (Green), Juan (Toscano-Anderson), it’s on everybody.”