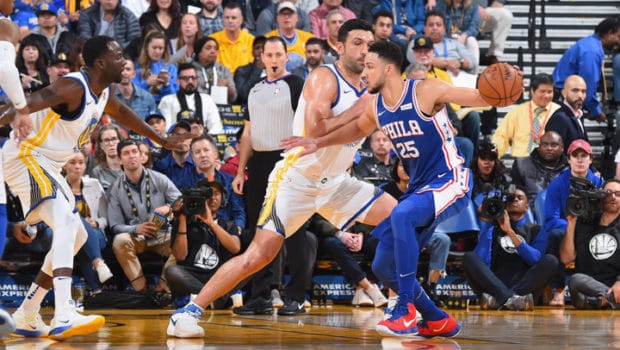 Kevin Durant returned from missing one game with a leg injury to finish with 29 points, leading the Golden State Warriors past the visiting Sixers 135-114.

Draymond Green had 10 points, 10 rebounds, seven assists, five blocks and two steals. Stephen Curry took a knee to his right quad muscle — similar to what Durant dealt with — but added 22 points and nine assists to surpass the 4,000-assist mark for his career and Klay Thompson scored 23 as the Warriors pulled away in the second half.

Durant sat out Wednesday’s win against the Timberwolves with a bruised left thigh but hardly showed any signs of an issue. Curry, sporting new twisties in his hair, briefly went to the locker room early in the second but returned.

JJ Redick scored 17 points to lead the Sixers, who hung around for a half.

“You realize that there is zero margin of error,” coach Brett Brown said. “There is so much firepower on that team.”

The Warriors have won by 17 or more points in each game of this winning streak, averaging 122.8 points.

Golden State built its first double-digit lead of the night at 86-76 on Nick Young’s 3-pointer with 4:14 left in the third, and rolled from there getting another quick 3 by Young, one from Curry and a Durant jumper.

The Warriors won their ninth straight against the Sixers and sixth in a row at Oracle Arena.