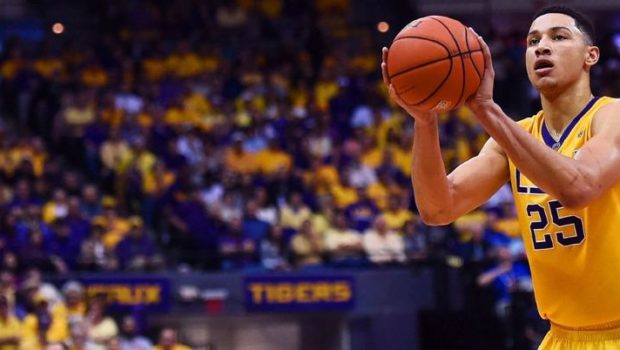 SIXERS DRAFT FAVE BEN SIMMONS IS FOCUSED LIKE A LASER!

So, Ben Simmons, where have you been the last three months?

Shortly after his LSU season ended, the Sixers’ No. 1 pick favorite in the June 23 NBA draft signed with agent Rich Paul and moved to Cleveland to prepare for the draft. He didn’t show up at the combine and even declined an invitation to attend the lottery selection.

Some have read Simmons’ reluctance to interact with teams and the media as antisocial or even arrogant. But after watching him in Cleveland last week, it appears Simmons is incredibly focused on his NBA career.

As ESPN.com’s Chad Ford reports, his routine is the same every day. He gets up in the morning and heads to the gym, where he’s spending time putting up shots, doing ball-handling drills, working on his transition game and change of pace — the whole works.

The workout in Cleveland looked like the drills most teams put guards through. That Simmons looked comfortable in that setting explains his appeal as the No. 1 pick in the draft. Guys who are 6-foot-10, 240 pounds, move as effortlessly as he does on the court and are as comfortable as he is with the ball just don’t come along … really, ever.

Simmons’ jump shot has been the major source of concern about his game. But the indications are, while he’s no Kevin Durant, his jumper is not broken.

He shot just three 3s all season at LSU. I saw him get up roughly 100 NBA 3s in the workout. His outside shot is getting better — or maybe it was solid all along, and he just seldom used it.

In college, he could get to the rim almost at will. He knows that in the NBA he’s going to have to force defenses to guard him on the perimeter. It’s an area he needs to continue to work on, but it was hard — in this setting, at least — to be overly concerned about it, especially given all the other skills he brings to the table.

“The one thing that almost always gets better from college to the pros is a guy’s jumper,” one NBA GM told me Tuesday. “It’s a fixable problem, and frankly, I’m not sure how much of a problem it really is. LeBron [James] couldn’t shoot when he came out. Lots of guys couldn’t. They get better.”

After the morning gym workout, Simmons headed to the weight room, primarily to work on his core and do pool workouts. He has added muscle, and his body is lean, chiseled and explosive.

Then he was back in the gym in the afternoon — and one more time at night. Three-a-days for the first month, then two-a-days the past month. On the weekends, he’s got yoga, boxing and Pilates for balance and focus.

Simmons’ work ethic the past two months has been extraordinary. It’s a counter-narrative to whispers in the media that Simmons didn’t care at LSU, isn’t competitive or doesn’t want it badly enough. Everything I saw on the court looked like a player who doesn’t just want to be the No. 1 pick — he wants to be great.

“Being the No. 1 guy, they’re going to put that target on your back,” Simmons said. “But you’ve got to be prepared for it. It comes with the territory. … There’s always going to be talk about who should be 1 or 2 in the draft. But my focus is just getting ready for the next level. I’m not worried who goes where.”

Simmons seems unconcerned about where he goes. His agent has yet to commit to his working out anywhere, including Philly and Los Angeles. It likely won’t matter. Sources say the Sixers are strongly leaning toward taking Simmons No. 1. If they don’t, the Lakers will jump on him at No. 2.

But Simmons is concerned about being ready for his first real game in October. That’s the difference. While most prospects are trying to get the job, Simmons is already working on getting the promotion.

“It’s an 82-game season. You have to prepare for that,” he said. “I’m worried about playing against Paul George, Kevin Durant and LeBron James next season. Once you get drafted, you’re at the bottom. You have to start all over again. People don’t care where you were drafted. They just care whether you can play.

“This is my job now. This is the main focus for me. I have to come in every day and put the work in. This is a great job. I love doing it. Every day, the goal is to get better.”