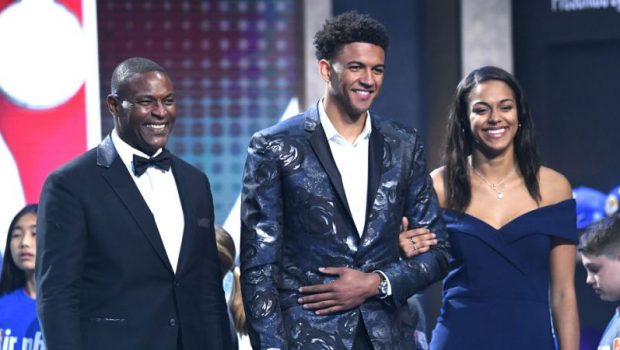 SIXERS DRAFT A STEAL: MATISSE THYBULLE IS A DEFENSIVE DISRUPTOR!

The Sixers worked out a lot of their draft prospects, including Cam Johnson, the North Carolina sharpshooter.

But last night they snagged a defense-oriented guard whom they never saw in person in Camden.

In fact Matisse Thybulle never worked out for an NBA team like so many first-round prospects.

The Sixers landed Thybulle as the latest piece to a franchise making a serious push toward an NBA title.

A 6-5, 200-pounder, Thybulle was a four-year player for Washington and was the 2018-19 Naismith Defensive Player of the Year. He’s considered one of the best defensive players in the draft and earned the nickname ”The Disruptor” as the only player in Pac-12 history with two 100-steal seasons.

The Sixers sent the 24th and 33rd overall picks of the draft to Boston so the Celtics could take Thybulle for them with the 20th pick. Two years ago, the Celtics and 76ers made another trade for a Huskies star when the Sixers moved up to the No. 1 pick to draft Markelle Fultz. That move didn’t work out and Fultz was traded in February to Orlando.

Thybulle was named Pac-12 men’s basketball player of the year by The Associated Press after becoming the first Division I player in 20 years to have 100 steals and 70 blocked shots in a season. Thybulle was the Huskies’ fourth-leading scorer at 9.2 points per game, but dominated at the top of their disruptive zone, using his long arms to block shots and reach into passing lanes. He led the nation with 3.50 steals per game.

He could turn out to be one of the surprises of the draft – even if he has plenty to learn about the Sixers.

”I don’t know much other than they’re a talented group with great coaching,” he said.

The Sixers went 51-31 under coach Brett Brown and were knocked out of the Eastern Conference semifinal for the second straight season.

This was the first draft run by general manager Elton Brand, who was hired just before last season. The draft is only the first piece of what is expected to become a pivotal offseason for the Sixers and Brand spent his first one swinging deals. The Sixers also traded the 34th pick and the 42nd pick, and took Iowa State’s Marial Shayok with the 54th pick. Shayok is believed to be the first basketball player from Ottawa selected in the NBA draft.

The Sixers head into the summer with Jimmy Butler, Tobias Harris and JJ Redick all entering free agency. Butler and Harris could sign maximum contract deals with the Sixers. Redick has signed one-year deals each of the last two years to stay with the team. The Sixers surrendered key assets in trades during the season for Butler and Harris that signaled they were all-in for a championship. They have the cap space to retain Butler and Harris and keep a nucleus that was a Kawhi Leonard Game 7 winner from advancing to the East final.

Embiid, Simmons, Butler and Harris form an All-Star caliber lineup that should easily keep the Sixers at the 50-win mark and poised to make a run at their first NBA title since 1983. But it could be costly. The Sixers are already on the hook for the $121 million left on Embiid’s deal and Simmons is a year out from being eligible for a max-level extension.

Brand, the No. 1 overall pick in the 1999 draft, starts his first summer as GM after he was thrust into the position after replacing Bryan Colangelo.

The Sixers failed to have a lottery pick for the first time since 2012. They’ve whiffed over that span more times than they’ve hit. Embiid and Simmons have become cornerstones. But Fultz (2017), No. 3 pick Jahlil Okafor (2015) and 2013 NBA rookie of the year Michael-Carter Williams all flamed out with the Sixers, stunting the progress of the rebuilding era known as the Process.