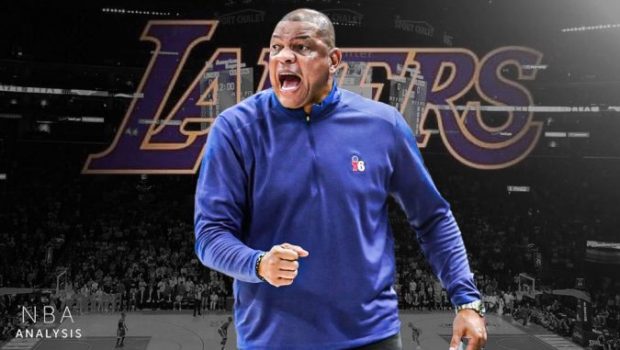 The Lakers more or less announced a few days ago that they have settled on three no-names in their bake-off to be coach of the LeBron James-led team:

So, LA Times columnist Bill Plaschke has stepped in with an ultimatum:

Rivers deftly handled the Clippers during the Donald Sterling debacle, so Rivers can do that.

They need someone who can keep the path smooth for James as he breaks Kareem Abdul-Jabbar’s scoring record next season and perhaps retires the following year.

Rivers won an NBA championship with three free-spirited veteran superstars in Boston, so Rivers can do that.

They also need someone who can somehow salvage the career of Russell Westbrook if the embattled player isn’t traded, somebody who can keep Westbrook’s attention longer than preseason practice, something which Frank Vogel failed to do.

Rivers has dealt with the difficult Chris Paul and the mercurial Blake Griffin and the inconsistent DeAndre Jordan — all at once — so Rivers can do that.

As much as anything, with turmoil tugging on the franchise from every corner, the Lakers need a likable and respected personality who understands their place in this community and can serve as a trusted voice and welcome face who can shape and deliver their message.

If Rivers wasn’t already under contract, here’s guessing he would be the Lakers coach by now. He still can be. The Lakers are known for doing amazing things to make seemingly unreachable acquisitions. This one would be worth the work.

As if this important decision were a game show, Lakers fans were presented this week with three potential head coaching options.

The Lakers should pick door No. 4.