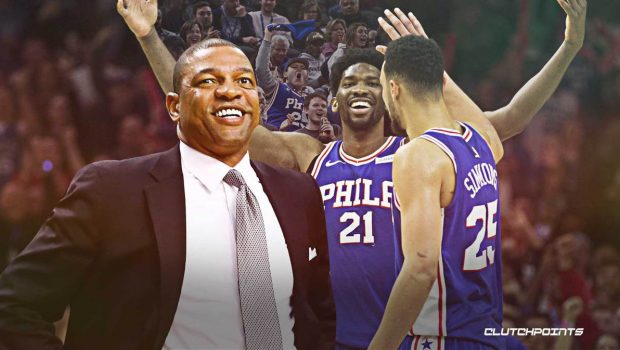 The Sixers are in their Camden camp, preparing for their first exo on Dec. 15 vs. the Celtics and the regular season a week later.

Not about making all the new pieces fit with Joel Embiid and Ben Simmons.

“I’m very concerned if we can pull this off,” Rivers said, noting the numerous college football games that have been postponed or canceled.

Rivers noted something else: NFL teams can weather missing a handful of players because rosters are bigger. NBA teams are 15 players, and by current rule only 13 can be active on game days. Even a small outbreak of two players coming down with COVID-19 or having to quarantine because of close contact could be devastating.

The NBA does deserve praise for responding the way it did in March, quickly shutting down after just one of its players tested positive for the virus. While it certainly wasn’t the best thing for the league’s coffers, it was the right thing to do, not just for players and staff, but for the thousands of fans streaming into arenas.

But this time around — with the United States breaking the ignominious record for most positive cases in a single day on a near-daily basis, over 2,000 people dying just Tuesday, the head of the CDC saying on Wednesday that the coming winter could be “the most difficult time in the public health history of this nation,” and a vaccine months away for healthy adults (assuming the NBA doesn’t jump the line) — it won’t take that tack.

That’s according to the league’s 134-page health and safety protocols guide, which was distributed to teams last week, and which Yahoo Sports obtained a copy of. The guide specifically says “a small or otherwise expected number” of COVID-19 cases will not lead to suspension or cancellation of the 2020-21 season.

What number of cases could lead to a stoppage? Is there such a number? The guide doesn’t say.

And yet into this breach steps the NBA, with only protocols and the hope that players and coaches will do the right thing in their own facilities, with rules about mask-wearing, social distancing and smaller travel parties.

This despite seeing that the NFL walking that same path has basically been a failure.

Take for example the NFL’s latest debacle. Roughly a third of a team’s roster was on the COVID-19 reserve list at one time, but a marquee divisional matchup had to be played — albeit on a Wednesday afternoon, like a second-rate college bowl game.

Look, we understand that the bubble wasn’t idyllic for many players, coaches and staff from a mental health standpoint, and that the novelty of being sealed off from the rest of the world wore off for some. Maybe a rotation could have been worked out, with each conference in a bubble for 2-4 weeks of games while teams from the other conference were home but under strict confinement that allowed them to be with family, and then switch.

The NBA can’t have it both ways though. If the league has determined, as the NFL has, that it will play and finish the season regardless, it’s unwise not to go back to a bubble. It’s unwise for NFL commissioner Roger Goodell to imply, as he did in a conference call on Wednesday, that his league won’t bubble even for the postseason.

It’s the only way to ensure the safety of all. But safety is only getting lip service these days, particularly where there’s money on the line.

The Golden State Warriors already had to push back the start of training camp after two players tested positive. They almost certainly will not be the last NBA players to contract COVID-19 in the coming days and weeks, not with the virus showing no signs of mitigating.