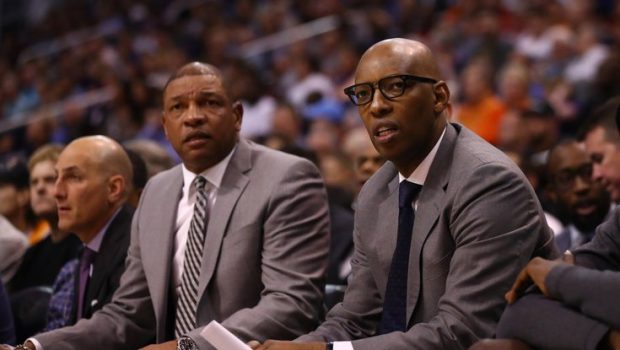 Daryl Morey is being hired as the Sixers new president of basketball operations, and new coach Doc Rivers is also getting aggressive in assembling his staff.

The Sixers already hired former Memphis Grizzlies head coach Dave Joerger as an assistant, and now former Indiana Pacers assistant Dan Burke is joining the fray. So, too, is Sam Cassell, who was on Rivers’ staff in Los Angeles.

Los Angeles Clippers assistant coach Sam Cassell will be added to Doc Rivers’ staff with the #Sixers, according to sources. That was the expectation if he didn’t get a head-coaching gig. pic.twitter.com/aDnLCtozB0

Cassell had been one of the perceived candidates for the Rockets job, but Houston’s search appears to be narrowed down to Jeff Van Gundy and Stephen Silas. As such, he will reunite with Rivers in Philly.

Yes sir!!! Now we can enjoy together what the league lets me get away with #PhillyForever https://t.co/7hctLSilCV

It remains to be seen what all of this means in context of how Morey will look to shape the roster. Still, the Sixers are rapidly bringing things into place.

Philadelphia will enter the 2020-21 season with plenty of expectations after such seismic changes in leadership. There are a number of questions entering the offseason, such as how Morey might handle Al Horford’s contract or whether the Sixers remain intent on retaining both Ben Simmons and Embiid.

Regardless, there appears to be more clarity at the top, and Rivers’ staff figures to have plenty of input on personnel decisions.