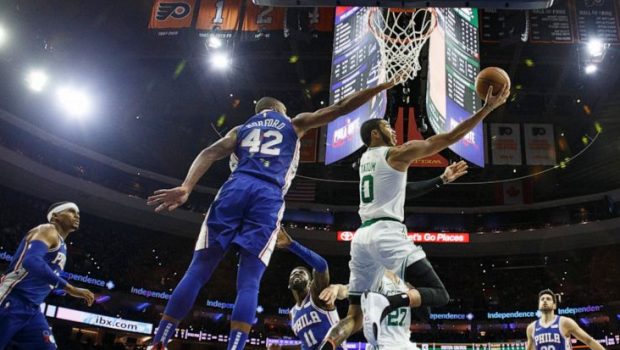 SIXERS DEFENSE WILL KEEP THEM IN EVERY GAME THIS SEASON!

The Sixers took down the dreaded Celtics in their opener Wednesday night 107-94, and it wasn’t pretty.

With new players like Al Horford and Josh Richardson in the starting line-up, it’s going to take some time for the Sixers offense to figure itself out.

The defense, on the other hand, is in mid-season form.

The Sixers won despite shooting just 24.1 percent (7 of 29) from 3-point range and committing 17 turnovers, way too many.

They swarmed Kemba Walker, who shot just 4-for-18, and they nailed 26 of 36 free throws, led by Richardson’s nine. They did so by outscoring the Celtics 58-44 in the paint and 14-8 in transition, helping to overcome half-court deficiencies.

In short, the 76ers won by playing smash-mouth offense and bully-ball defense, just like head coach Brett Brown said they would.

“Of the teams that I’ve been with, offense needs to catch up to the defense. If you play hard, and you stick to sort of simple rules and there’s a high level of accountability, and you have a team like I have with the length that they possess, then I would expect our defense to be quite good, and our offense maybe not so,” Brown said after the game, discussing the recipe to early season success. “If we can get the defense holding the fort, and incrementally improving, and then have our offense catch up where we’ll get in more rhythm, making more shots, then I like that type of trending.”

Walker, who averaged 37 points-per-game against the Sixers last season, finished with just 12 points. It was largely due to an off-shooting night from the three-time All-Star point guard, no doubt. But Richardson and rookie Matisse Thybulle fought over ball screens that had eaten up the Sixers’ perimeter defenders in years past. They used their length to recover and contests shots, bothering Walker with their size in a way in which it never felt like he was bothered in the past.