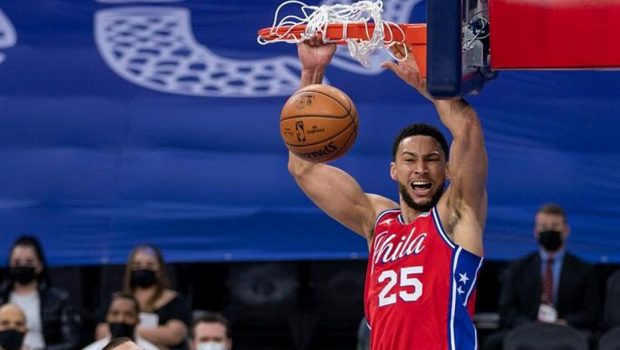 He talks about it every day, ad infinitum.

Even the day after Simmons exploded for 42 points in the Sixers loss at Utah earlier this week.

So, it was up to Sixers boss Daryl Morey to set Mikey Miss straight.

As Missanelli pressed Morey on Thursday about Simmons and his mid-range game, Morey maintained that he doesn’t believe Simmons needs to shoot jumpers, and that fans should focus on what he is, rather than what he isn’t.

“… The reality is if Ben was on a different team, where everyone on the floor was a shooter in space, that would be optimal for Ben, but it wouldn’t be optimal for … his chances to win a title,” Morey said. “But that’s why people see these glimpses from Ben, it’s when everything around him is optimized. … He’s just an extremely talented player on both ends; that’s just a treasure to have. The focus on the things he can’t do is pretty maddening, personally, to me. When I had Yao Ming in Houston, there wasn’t like a million people saying, ‘He should be able to do this and this,’ they just sort of appreciated Yao Ming for what he was.”

Simmons scored his 42 on 26 field goal attempts, none of which was taken more than 13 feet from the basket, despite the presence of two-time Defensive Player of the Year Rudy Gobert roaming the paint.

Missanelli went on to note that teams play Simmons differently in the postseason, walling him off at the free throw line and hampering his drives to the basket.

“You want, each time down the floor, for your most efficient options to happen,” Morey said. “Even if Ben was a very good 15-foot shooter, the only time that could be our optimum option is if it’s four or less on the shot clock. Otherwise, you might get a spot-up 3, you might get a Joel (Embiid) post-up, you might get a Tobias (Harris) drive to the hoop. There’s so many other options you’d pick before that, even if you had it.”