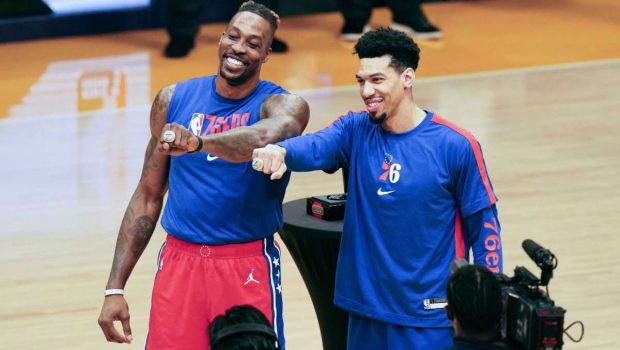 SIXERS DANNY GREEN HAS 3 RINGS: ‘WE HAVE TO BE MORE LOCKED IN’!

Sixers guard Danny Green (above right with Dwight Howard) knows a little about what it takes to win an NBA title:

So, when he talks we should listen.

Via Chris Franklin of NJ.com:

“We have to be able to be more locked in,” Green said after the Sixers’ narrow win over the Spurs last week.

“No disrespect to the teams we’ve played, any team can win in on any given night, and they’re very talented teams, but they are not 100% healthy, and they don’t have everybody. If we’re going to play like the number one team in the East, or a championship contender, or a team that wants to be the last team standing with the potential we can play, we need to do a lot better. We’re not playing the right way offensively or defensively.”

On Friday night, New Orleans played without Zion Williamson, Brandon Ingram, Steven Adams, and Josh Hart who were all ruled out due to their respective injuries. Even without the majority of their core, the Pelicans still managed to put up a fight and erase a 17-point lead built by one of the stronger contenders in the league.

Despite the adversity, the 76ers still proved to be steadier in crunch time as they narrowly escaped with a 109-107 victory on their home floor. Big man Joel Embiid had another stellar outing with 37 points and 13 rebounds as he led his team to their seventh consecutive victory to hold onto the top spot in the Eastern Conference.

The Sixers’ tightly-contested encounter against the Pelicans was much-needed as they are heading to a playoff run that is expected to be filled with high expectations as a top-seeded team in the East. Hopefully, Doc Rivers and his men can come out with a stronger sense of urgency in their coming games before entering the postseason where they will certainly face stiffer competition moving forward.

One thought on “SIXERS DANNY GREEN HAS 3 RINGS: ‘WE HAVE TO BE MORE LOCKED IN’!”