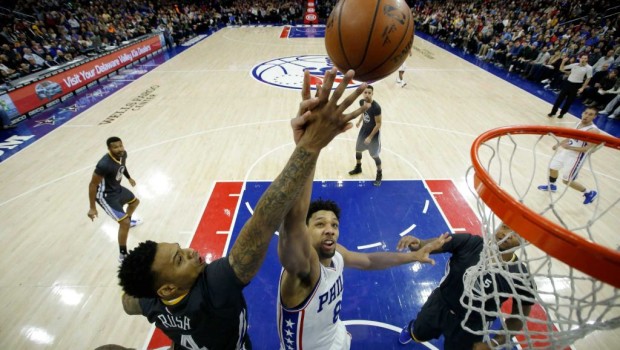 SIXERS’ CONFIDENCE SKY HIGH AFTER PUSHING CHAMPS TO THE LIMIT

The Sixers have gotten props in Philly and around the NBA for their gutty loss to the NBA champ Golden State Warriors last Saturday night, 108-105 after being down 24 points in the second half.

And it was a great game to watch, as the sell-out crowd at the Wells can attest.

After putting a scare into the reigning NBA champions, Ish Smith and the 76ers seek a rare win over the Atlanta Hawks tonight.

With a roster that includes 10 of 15 players with two or fewer years of experience, Philly (7-41) was expected to be among the NBA’s worst teams for a third straight season.

Jerry Colangelo was hired as chairman of basketball operations in December, tasked with the challenge of improving the moribund franchise.

So far, he likes what he sees from a 6-11 stretch that followed an abysmal start to the season.

“There’s a lot of things that we want to continue to discuss regarding the future,” Colangelo told Sixers.com.

“I see it in practice, just the attitude of the players is much more positive. I think that’s important, especially with a young group, that there’s something to cling to.”

Colangelo cited Smith as the key to that improvement. The guard was re-acquired from New Orleans for two second-round picks on Dec. 24, and he’s averaging 15.9 points and 8.1 assists in 17 games. He had 12.0 points and 6.1 assists in 25 games for the Sixers last season before moving to the Pelicans as a free agent, bringing his total to nine teams in six seasons.

“I think he has shown he has the capacity to do a lot more than maybe where he was picked,” Colangelo said of Smith, who went undrafted in 2010. “He’s bounced around quite a bit, and it’s a great story that finally maybe he’s landed somewhere where he could do a lot more than fit that description or that role.”

Smith had 16 points, nine assists and four steals before the Sixers gave up Harrison Barnes’ 3-pointer with 0.2 seconds left in a 108-105 loss to Golden State on Saturday.

“It shows we have no letdown, no backdown,” coach Brett Brown said.

Jahlil Okafor should see an increased role after scoring 13 points in 20 minutes against the Warriors following a two-game absence due to illness. The rookie center has totaled 40 points and 14 rebounds in two meetings with Atlanta – both losses. That includes 21 in a 126-98 home loss Jan. 7.

The Hawks’ Jeff Teague only had seven points in that matchup. He hit 12 of 15 from the floor on his way to a season-high 32 points while dishing out eight assists in Monday’s 112-97 win over Dallas, ending Atlanta’s three-game skid.

That hasn’t happened on the road, where the Hawks (28-22) are 12-14 after compiling a 25-16 record last season. They’ve lost six of the last eight away from Atlanta, mustering just 91.2 points per game in those defeats.

Teague is averaging 10.8 points on 35.4 percent shooting over the last 10 road games.

Paul Millsap had 18 points and six rebounds at Philadelphia last month, but he’s scoring just 9.7 per game over the last three.

Atlanta has won nine of 10 against the 76ers, averaging 109.3 points in those games.