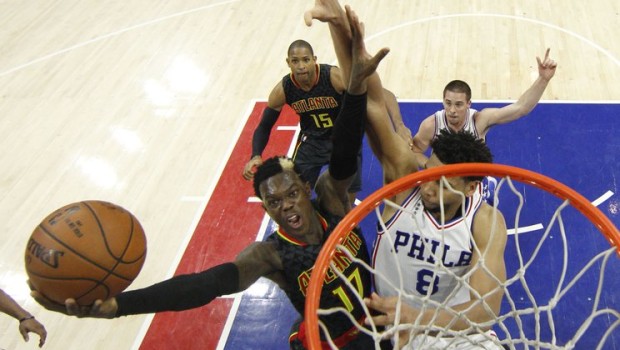 The electric atmosphere was missing, and the Sixers came back to earth.

Last Saturday the Wells was packed to the gills as the Sixers took the NBA champion Golden State Warriors to the limit before losing 108-105.

Last night, the electricity was gone, thanks to the Atlanta Hawks.

Tim Hardaway Jr. and Mike Scott led a balanced attack with 13 points apiece and the Hawks coasted to a 124-86 victory.

All 13 players scored and eight finished in double figures for Atlanta, which swept the three-game season series with an average winning margin of 29 points.

”Even though their record doesn’t show it, they’re a dangerous team,” said Al Horford, who had seven points, six rebounds and four assists. ”They’re a team that plays hard. You can’t take them lightly and I felt like every time we’ve played against them, we’re ready to go.”

The Hawks have won two straight after snapping their three-game losing streak with Monday’s 112-97 home victory over Dallas.

”On both ends of the court, all up and down the roster, a lot of guys played well,” Atlanta coach Mike Budenholzer said.

Nik Stauskas had 17 points for the 76ers, who dropped to 7-42 with their second-worst loss of the season.

”We don’t have much answers for them,” 76ers coach Brett Brown said. ”I just feel like we didn’t come out with much energy on both sides of the ball. . It sure feels like this one is not (a good matchup) and the numbers bear that out.”

The Hawks grabbed a 20-point lead, 66-46, early in the third quarter when Jeff Teague drained a wide-open 3-pointer. Philly answered with 10 of the next 12 to close within 68-56 on Jahlil Okafor’s drive with 6:38 remaining in the period. But Atlanta outscored the Sixers 20-6 the rest of the quarter to take a commanding 88-62 lead into the fourth.

Dennis Schroder (above) scored the Hawks’ final points of the quarter on a free throw after being fouled by T.J. McConnell with 1.9 seconds left.