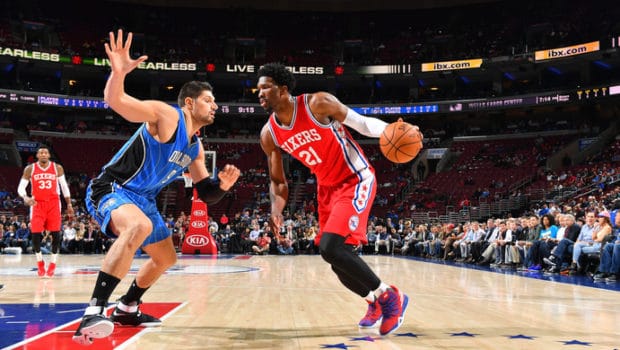 Joel Embiid had the first double-double of his career, tallying 18 points and 10 rebounds — not to mention four blocked shots.

This was a game the Sixers should have won.

And they know it.

The young team lost 103-101 to the mediocre Orlando Magic last night at the Wells after having been up by 18 in the second quarter.

With 5.7 seconds left in regulation, and the score even at 101-101, Orlando sent a sideline inbounds pass to Nik Vucevic, who lost control of the ball at the foul line. Joel Embiid gave chase, but the ball bounced away and bounded to the block, where Serge Ibaka was stationed, unguarded.

The only Sixer in the vicinity, T.J. McConnell had no choice. Rather than let Ibaka go in for an easy lay-up, the point guard was forced to foul.

The impact of the collision was so hard that both McConnell and Ibaka ended up on the floor. A few feet away, Embiid was also down, having gotten knocked over during the scramble for the loose ball.

All three players needed a few moments to collect themselves before getting to their feet.

At that point, only 1.4 seconds remained. Ibaka went to the stripe, and sunk his free throws. The Sixers were out of time.

“It’s part of this group trying to figure out how to execute better,” coach Brett Brown said of the Sixers’ efforts in crunch time.

On the Sixers’ final two possesions, they fed the ball to Embiid. Both attempts resulted in turnovers.

“We’d do it again,” said Brown, “try to put him in a position where he can help us go get a win.”

The outcome spoiled another promising start by the Sixers, and several stellar individual performances.

Fueled by strong guard play from Gerald Henderson and Sergio Rodriguez, the Sixers burst out of the gates, opening the evening with a 10-0 run. They held a 29-24 advantage at the end of the first quarter, and increased the margin to 14 points, 57-43, by halftime.

Despite entering the night having converted just 39.0 percent of their total field goal attempts, the Sixers shot 53.3 percent in the opening stanza, punching in six of 11 3-point tries.

Orlando made substantial inroads in the third period, erupting for 41 points. The Magic started the frame by sinking their first 11 shots, and subsequently trimmed the deficit to three points heading into the fourth.

“They got away from us,” Brown said. “They really started to move the ball well. I thought they did a good job of rolling out of pick-and-rolls.”

Rodriguez buried an impressive 31-foot triple, one of his two in the game, to put the Sixers ahead 94-84 with eight and a half minutes to go, but Orlando charged back again.

Embiid nailed a pair of late free throws to give the Sixers a 101-97 edge; however, cough ups on the Sixers’ final two possessions helped the Magic tie the tilt at 101-101 with 27 seconds to play.

Hollis Thompson went four for four from 3-point range, and topped all Sixers with 22 points. Dario Saric had his finest offensive showing to date, delivering 21 points.

“I feel a little more focused,” said Saric, who managed only 10 points and four field goals through his first two outings. “I didn’t rush so much before. I took good shots.

“Everybody is saying to me, ‘Welcome to the NBA.’ Something is different for me. I try to give a hundred percent during games like today; maybe we’ll be better. You cannot know. A new day is a new challenge, and new fight.”

As for Embiid, he registered the first double-double of his career, tallying 18 points and 10 rebounds. The big man also supplied four blocked shots.

Rodriguez manufactured a double-double as well, his second ever at the NBA level. He finished with 12 points and 11 assists, one off his career high.

The Sixers complete their first back-to-back set of the season Wednesday in Charlotte.

Brett Brown Said:
On Joel Embiid getting used to playing in competitive, late-game situations –
“When the game heats up, people react maybe a little bit faster. Maybe the defense gets cranked up a little bit harder. All those things come to my mind. I feel like we went to where we wanted to go in relation to putting Jo in a position to help us go get a win. He will get better, and so will we.”