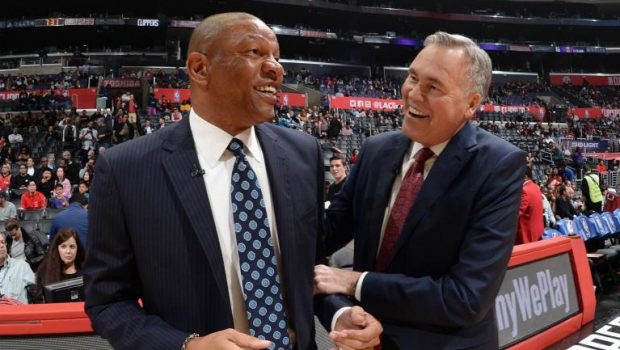 SIXERS CHOOSING RIVERS OVER D’ANTONI WAS A NO-BRAINER!

For about a week Sixers fans have misled by lame-ass Keith Pompey of the Inky, who “reported” that “sources” had confirmed that the bake-off for the coaching job was between Ty Lue and Mike D’Antoni.

The former is inexperienced, notwithstanding his 2016 NBA Finals title with the Cavs who, by the way, had someone named LeBron James.

The latter is an NBA lifer who runs an up-tempo offense which is entertaining but ultimately never complete enough to seriously compete for an NBA title. His contract wasn’t picked up last month after his Houston Rockets fell out of the playoffs.

Doc Rivers was fired four days ago after his Los Angeles Clippers lost to the Denver Nuggets in the bubble playoffs.

Sixers GM Elton Brand is also an NBA lifer and a smart guy.

Plus, he has eyes.

So, he waited to see what shook out. And, voila, it was Doc Rivers, one of the best coaches in the NBA right now.

Even Stevie Wonder could have seen that.

The Sixers wanted a big-name coach with ample postseason experience to be Brett Brown’s successor.

They got that in Rivers, who ultimately beat out D’Antoni.

Rivers has won 943 regular season games, and another 91 in the postseason. Those numbers put him 11th all-time in regular season wins, and seventh all-time in playoff wins. He led the Boston Celtics to an NBA title in 2008, and took them back to the Finals in 2010 where they lost to the Kobe Bryant-led Los Angeles Lakers.

In short, Rivers has learned what it takes to win at the highest level, and that experience is obviously very intriguing to the Sixers.

D’Antoni, on the other hand, has never advanced past the conference finals, despite coaching some of the most prolific regular season squads in league history. Steve Nash and James Harden were both able to win MVP awards while being coached by D’Antoni, but neither has a ring to show for it.