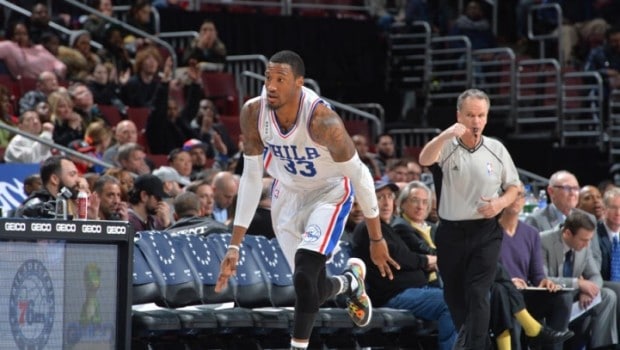 Rookie Jahlil Okafor tied his career high with 26 points to go with 10 rebounds, and Robert Covington (above) scored a career-high 29 points for the 76ers, who played without top big man Nerlens Noel who is averaging 10.8 points, 8.2 rebounds and 1.6 blocks and who was a late scratch due to right knee tendinitis.

If ever there was a game that the Sixers expected to win it was last night’s scrum with the lowly Sacramento Kings at the Wells.

And for the longest time it looked like Philly would head into the All Star game break with a win.

The 76ers controlled the game throughout and led by 12 entering the fourth quarter. Sacramento slowly chipped away at the lead and finally went in front on DeMarcus Cousins’ 19-footer with 2 minutes, 19 seconds left that made it 106-105.

Cousins had 28 points and 12 rebounds, and Darren Collison scored 21 of his 25 points after halftime to lead Sacramento to a 114-110 comeback victory over the Sixers.

Rajon Rondo added 14 points, eight rebounds and 15 assists for the Kings, who snapped a four-game losing streak overall and six-game skid on the road while winning for just the second time in their last 10. It also allowed Sacramento to enter the All-Star break on a positive note following a tumultuous week that included rumors of the impending dismissal of coach George Karl.

”It’s a good time for a break,” Karl said. ”And winning gives you the luxury of trying to get back to a momentum and positive energy rather than the negative energy that’s been hanging over our team for the past couple of days.”

Karl was given a vote of confidence by general manager Vlade Divac on Tuesday. Losing to the 76ers, who dropped to 8-45, certainly wouldn’t have quieted Karl’s critics though.

”We definitely need it,” Quincy Acy, who provided needed energy in the second half, said of the win. ”It’s been a rough past couple of days.”

Rather than let Philly try a tying 3-pointer, the Kings fouled Ish Smith and the 76ers guard made one of two. Collison then iced the game by making a pair of foul shots with 8.1 seconds left.

”We just didn’t do a good job executing the last few minutes of the game,” Okafor said.

Phillly’s lead grew to as many as 17 points in the third quarter when Nik Stauskas hit a 3-pointer to make it 73-56 with 7:32 left in the period. The Kings scored 11 of the next 13 over 3:05 to get within 75-67. However, Cousins was forced to the bench on the Sixers’ ensuing possession when he picked up his fourth foul and the 76ers took advantage, stretching their lead to 87-75 entering the fourth quarter.