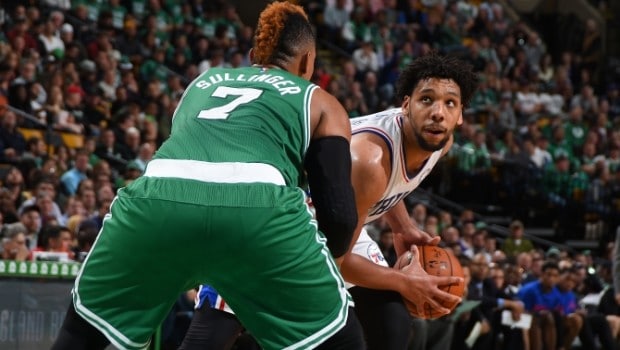 SIXERS TO CELTS: WE WANT A NO. 1 FOR JAH OKAFOR!

The Celtics have been panting after Sixers’ big Jahlil Okafor ever since he was drafted in 2015.

They need a big man desperately and the Sixers want to move Jah, who doesn’t fit into coach Brett Brown’s up-tempo offense and clamp-it-down defense.

But, according to the Boston Globe’s Gary Washburn there are limits to the Celts’ ardor:

… Okafor was considered a future NBA star during his high school days and lone season at Duke, but the league’s up-tempo style along with Okafor’s inability to shoot from the perimeter has left him essentially useless for the 76ers.

Okafor has been a good trooper but wants a change. Philadelphia does not want to buy out his contract and then watch him sign with a conference rival with no compensation.

The Celtics have long held interest in Okafor, but as more of a project than an immediate contributor. Boston is also not willing to part with a first-round pick for Okafor.

The 76ers have done a poor job of showcasing Okafor and maintaining his market value. He has played just one game this season, scoring 10 points in 22 minutes in a blowout loss to Toronto on Oct. 21.

Okafor has gotten into premium shape and has the ability to run the floor, but he hasn’t attempted a 3-pointer since his rookie season.

The question for interested teams is whether Okafor can serve as a consistent post presence. There are plenty of teams willing to give a 21-year-old former top prospect an opportunity. But the 76ers aren’t giving him away for free.