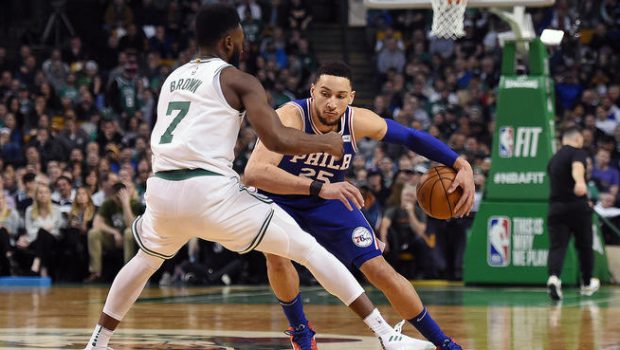 SIXERS-CELTS TONIGHT IS A PLAYOFFS PREDICTOR!

It’s only Feb. 1, but tonight’s Sixers-Celtics game in Boston has us thinking about another playoffs match-up in April or May.

The Sixers are looking to bounce back from a tough loss to the Atlanta Hawks to begin their four-game road trip.

The Celtics are currently the 3-seed in the East and they have been playing some good basketball, but they have not been able to figure out the Sixers, who are the 6-seed, just 2 games behind Boston.

Philly has won all three matchups with their heated rivals this season and they will be looking to finish off the season sweep of Boston for the first time since the 2000-01 season.

The Sixers had their issues on Thursday defending Hawks All-Star Trae Young as he worked them to the tune of 39 points and a career-high 18 assists. It does not get any easier tonight against All-Star in Walker. They will need their young wins to be better on the defensive end after coach Brett Brown said they struggled on that end.

“Just trying to judge the attention you give him,” explained Brown. “You give him a ton, and people reap the benefit of that. They get behind defenses, they squirt out and get open looks. I thought our best look was when we decided to go bigger, switch more, and just try to stay connected that way. I thought our young wings struggled tonight. They really struggled tonight, and he is difficult to guard.”

The Sixers turned to Shake Milton to start in place of the injured Richardson and he has done a solid job in his place. He then dropped a career-high 27 points on Thursday against Atlanta in his third career start and he has begun to turn heads within the Sixers organization.

“That doesn’t surprise me at all,” said Ben Simmons. “I’ve been around Shake since he got here, He works hard, he is consistent, and he trusts in his work.”

The Sixers have a tendency to play up to their competition so this could be a win.

They have the size advantage over Boston so they have that in their favor and the fact that having Milton playing so well is huge for them.