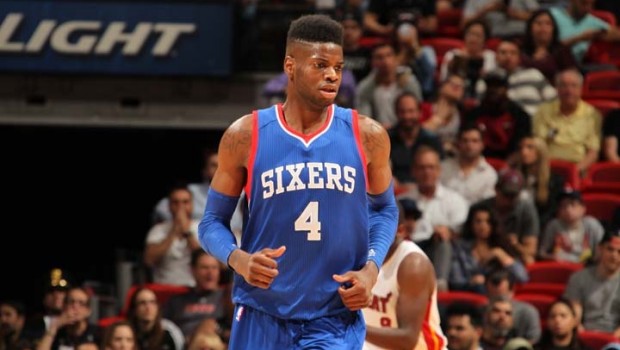 Nerlens Noel had 18 points, 7 rebounds and 4 blocked shots for the Sixers.

The Sixers started the Isaiah Canaan As Point Guard Era pretty much as it ended the Michael Carter Williams era.

Goran Dragic scored 23 points with 10 assists and Luol Deng made 11 of 14 shots and scored 29 points and the Heat set a season high for scoring in a 119-108 victory over the Sixers on Monday night. Hollis Thompson scored 22 points for Philly, which got 18 from Nerlens Noel, 16 from Robert Covington (left), 12 from Henry Sims and 11 from Canaan.

Miami outrebounded Philly 45-33, and rested Whiteside and Wade for the entire fourth quarter.

”That’s not who we are,” 76ers coach Brett Brown said. ”That’s not even close to who we are. … You are not beating anyone giving up 120 points.”

Philly was up 67-61 early in the third, then got outscored 30-12 over the final 9 minutes of the quarter. Dragic and Deng combined for 20 points in the third, one more than the entire 76ers’ roster over that 12 minutes and the outcome wasn’t in doubt down the stretch.

It was Dragic’s second game with the Heat, and things were much smoother than in Saturday’s debut against New Orleans. The Heat practiced Sunday and had their usual gameday-morning shootaround Monday, those sessions largely about getting the All-NBA third-teamer from last season in tune with Miami’s playbook.

The results were clear: Dragic made 9 of 14 shots and seemed at ease.

”He’s picked up the offense fast and how to play with guys fast,” Wade said. ”He’s only going to get better.”