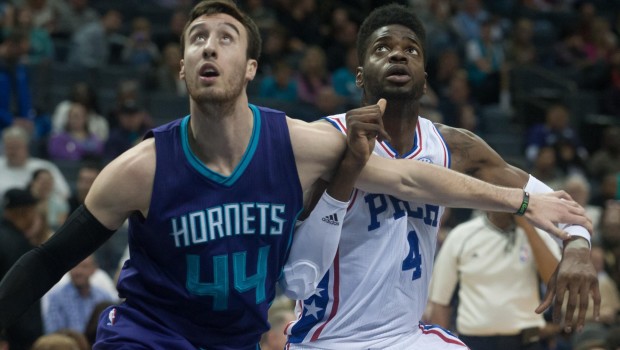 It was a foul mistake!

Jefferson more than held his own as the Hornets handed the Sixers a 113-88 loss last night in Charlotte.

“For our young guys to deal with Al … well, Al’s still amazing at the low post,” Brown said. “Any time you get caught dead behind [Jefferson], you’ve got problems. Now, with the design of their team, you’re a little less reluctant to go [help] because they have three-point shooters around him.

“Plus, you look at his numbers — 23 assists and only eight turnovers; that’s a pretty good ratio for anybody in the league — so he’s a willing passer. When you get caught dead behind Al Jefferson, good luck to you. You’re on an island, and both Nerlens and Jahlil when they were in that situation, that was an education in NBA post play.”

While Noel scored 16 points and pulled down a team-best nine rebounds, and Okafor added 10 points and seven boards, they had to contend with Jefferson most of the night.

Compare that to Jefferson’s numbers — the 11-year NBA veteran finished with a game-high 26 points and 10 rebounds, his third double-double this season, as well as a season-best five blocked shots and two assists.

Noel, who has battled with wrists and knee problems this season, came off the bench and shot a season-best 7 of 9 from the field (77.8 percent) in just over 27 minutes. He also made 2 of 4 from the free throw line, but turned the ball over twice.

“He’s one of the best post guys in the NBA,” Okafor said. “It’s no surprise he played that good.”

Noel had the most success guarding Jefferson in the third quarter, holding him to two points (on 1 of 2 shooting) and two rebounds in 8¼ minutes.

“I didn’t even let him touch the ball,” Noel said. “I think that’s when I helped the team the most. We started to get some defensive stops, and forced the ball into someone else’s hands.”

Yet, what was surprising to Jefferson is that the Sixers didn’t try to double-team him when he got the ball in the low post.

“I guess they think I’ve lost a step or something,” Jefferson said.

No, Brown said it was simply a matter of having to respect the Hornets’ much-improved offensive capabilities from last season.

The Hornets entered Friday’s game averaging 102.0 points per game, but they’re even better on their home court — an Eastern Conference-best 107.8 points per game. The Hornets are also tops in the conference at home in three-pointers made per game (11.2) and three-point percentage (40.3 percent).

The Hornets exceeded their scoring average and three-pointers made average Friday against the Sixers, and bettered their three-point percentage. They made 12 of 25 three-pointers, a 48 percent clip.

“They’re a good team,” Brown said. “Their style of play used to be, ‘Get Al the ball and grind it out.’ But they have so much more firepower now, they really can put points on the board quick. If they’re down eight [points], it’s not as dramatic as it might have been in previous years with their style of play, just trying to force Al.

“They’ve done a really good job of building the program, with some key pieces around Al. They really shoot it — they’ve become very capable from the three-point line.”