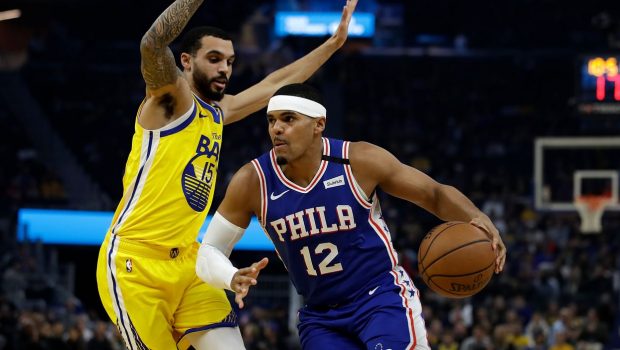 SIXERS CAN’T EVEN BEAT DUBS, WHO WERE MISSING STEPH CURRY!

Eric Paschall scored 23 points, including a pair of free throws with 51.7 seconds remaining, and the Golden State Warriors beat the Sixers 118-114 to snap a 10-game home losing streak.

Playing once again without Stephen Curry, the Warriors trailed most of the game and were down by eight entering the fourth quarter.

Curry, who returned from a 58-game absence to play Thursday night, was diagnosed with the flu and was held out. The Warriors termed it a seasonal flu and said that Curry has begun treatment. The team also said that Curry is not at specific risk for COVID-19 or coronavirus.

The Sixers again played without stars Joel Embiid and Ben Simmons, while Golden State also was without Draymond Green.

Damion Lee’s three-point play put Golden State ahead 113-111. Tobias Harris answered with a go-ahead 3-pointer, but was called for a three-second violation on Philly’s next possession following Lee’s missed 3-pointer.

After Paschall made his two free throws, the Sixers missed three consecutive shots, including a 32-foot jumper by Shake Milton. Mychal Mulder then made two free throws and Philadelphia got the ball back, but Furkan Korkmaz stepped out-of-bounds.

“It took until the fourth quarter to really get much traction defensively,” Kerr said. “Philadelphia did a good job beating us inside for the first three quarters . but our guys hung in there and kept the game close. And then fourth quarter really turned up the defense and we got a lot of great individual performances, too.”

Lee finished with 24 points and six rebounds to help the Warriors avoid being swept by the Sixers in the season series. Marquese Chriss added 13 points, 10 rebounds and eight assists.

Golden State won at Chase Center for the first time since Jan. 18.

“We were just making the right play for each other,” Chriss said. “We were playing unselfish, we were cutting without the ball.”

Harris scored 24 points and Al Horford had 22 points and 10 rebounds for Philadelphia. The Sixers fell a half-game behind the Indiana Pacers for fifth place in the East.

“The closeout period, the fourth quarter, defensively we were poor,” Sixers coach Brett Brown said. “When you look at bottom-line stuff, giving up almost 60 points in the paint, it’s tough to win (in) any situation if you’re giving up that many points in the paint and at the rim.”