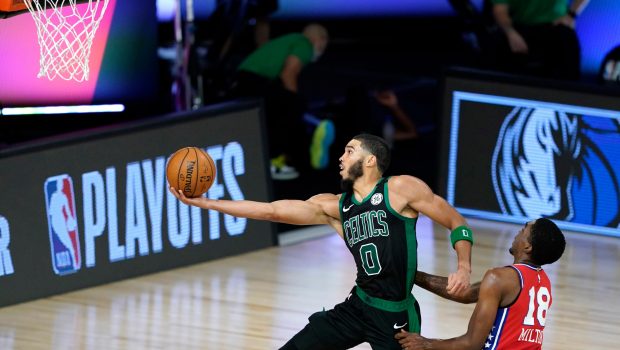 SIXERS CAN’T CLOSE — AS USUAL — AND CELTICS TAKE THE LEAD!

The Sixers had a chance in last night’s fourth quarter to steal the first bubble playoff game against the Boston Celtics.

But, as often happens with this team coached by the brain-dead Brett Brown, they couldn’t finish and now they are behind the 8-ball in this first-round series.

Jayson Tatum had career playoff highs of 32 points and 13 rebounds, and the Celtics beat the Sixers 109-101.

Jaylen Brown scored 15 of his 29 points in the fourth quarter.

“Jaylen Brown in the last period was exceptional,” Brown said. “It’s true that Jayson Tatum to start was excellent. You have to give them credit for how good they are at creating their own shot. I hope that we can do a better job of defending them in some of the schemes that we’re trying to execute.”

Joel Embiid had 26 points and 16 rebounds and Josh Richardson and Alec Burks each added 18 points for the 76ers.

Philly nearly pulled off the win without All-Star guard Ben Simmons, who is out indefinitely after left knee surgery.

Tatum scored 15 points in the second quarter to give the Celtics a 55-49 lead at halftime.

The Celtics went on a 9-0 run that included seven points by Brown to take a 92-86 lead, and Boston pushed the lead to 10 before the 76ers made a final push. Philadelphia cut Boston’s lead to 103-100 on a 3-pointer by Richardson with 59 seconds remaining, but the Celtics made 6 of 6 free throws in the final minute.