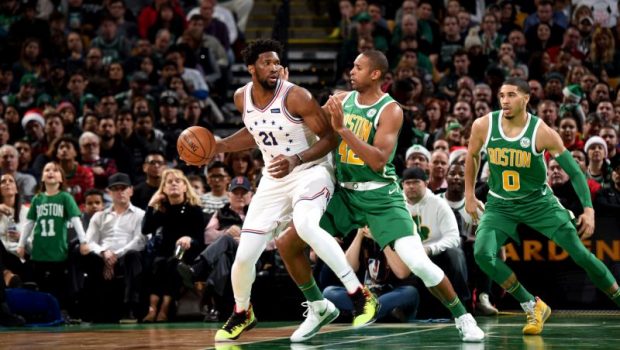 SIXERS CAN SETTLE SOME SCORES WITH DREADED CELTICS TONIGHT!

“This is not a rivalry . . . They always kick our [butt],” Sixers All-Star Joel Embiid said last October after the Celtics won the season-opener.

The Sixers are 0-3 against the dreaded Celtics this season and 3-17 over the last four seasons, including last year’s five-game wipeout in the Eastern Conference semifinals.

Tonight’s matchup at the Wells will be the last between these teams during this regular season.

Philly is 12-5 since acquiring Tobias Harris from the Clippers in February, though one of the losses came at home against the Celtics, when the Sixers were at full strength and Boston did not even have Kyrie Irving.

After last night’s win over the Hornets in Charlotte, the 76ers lead the Celtics by three games in the Eastern Conference standings. If Philly wins tonight it would all but dash the Celtics’ hopes of ascending to the No. 3 seed and it would lock them into the 4/5 series against the Pacers.

Against the Sixers tonight, the Celtics will be without Gordon Hayward for the second consecutive game as he remains in the league’s concussion protocol. Hayward took a shot to the head when he collided with Hawks forward John Collins on Saturday and he missed Monday’s game against the Nuggets. Coach Brad Stevens said Monday that the team was hopeful Hayward would be able to return on Saturday against Charlotte.

Stevens has said that Horford would likely miss three or four games down the stretch to rest and ensure that his left knee is fully healthy for the playoffs. After facing the Spurs on Sunday, five of Boston’s last seven games will come against teams with losing records, so the Celtics will likely try to squeeze in Horford’s off days against lesser opponents.

“We’re taking it game to game,” Horford said. “I definitely could use the time. The rest helps, so any chance that we get, we’ll get it and go from there.”