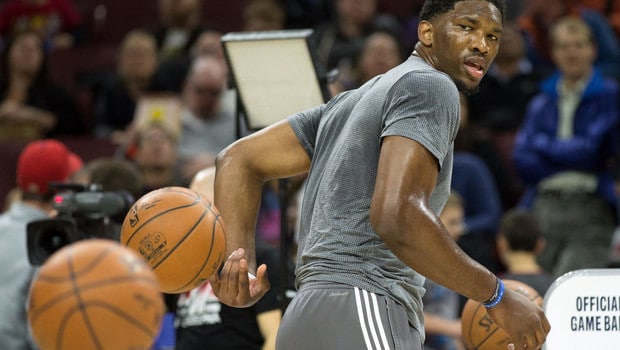 SIXERS CAN MAKE THE PLAYOFFS NEXT YEAR, BARKLEY SAYS

The Sixers are on a roll, thanks in part to their snagging the top pick in the June 23 NBA draft.

And legendary Sixer player and TNT analyst Charles Barkley has sure noticed.

“If Embiid [above] can play,” Barkley said during an appearance on the Mike Missanelli Show on 97.5 the Fanatic. “And Saric comes over, which he’s probably going to because the salary cap is going up, I think the Sixers have a chance at making the playoffs. I really do.

Meanwhile, Embiid tweeted encouraging news Tuesday night when it comes to his rehab and there have been reports suggesting that he has been cleared to participate in two-on-two drills as early as this week.

Embiid has yet to play a minute of NBA basketball after fracturing the navicular bone in his right foot during pre-draft workouts ahead of the 2014 NBA Draft. The injury caused Embiid to fall to the Sixers with the No. 3 overall pick and he underwent a second foot surgery last summer.

After an extensive rehab, it appears as though Embiid is close to returning. Barkley points out that the health issues the Kansas product has had to endure have shaped how the organization has been viewed in recent years.

“The Sixers aren’t nearly as bad as the situation looks. They just got screwed by the Embiid thing.”