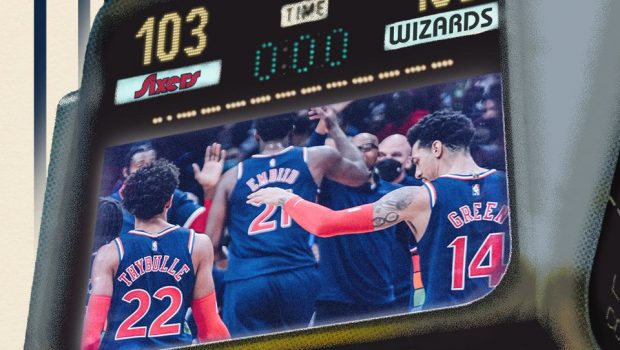 SIXERS BUZZ HITS THE CEILING: LOSS SHOWS THEY ARE A PIECE SHORT!

There has been a certain buzz about the Sixers lately.

That’s what having the fave for NBA MVP, Joel Embiid, will do for you.

Not to mention one of its rising stars, Tyrese Maxey.

But last night the buzz hit a buzz saw.

And the obvious conclusion is that as good as the Sixers have played, they are still at least one piece short to make a serious bid for the NBA title this year.

And Daryl Morey must pull the trigger on a trade of crybaby Ben Simmons for a lights-out shooter.

Spencer Dinwiddie scored with 90 seconds left to lead the Washington Wizards to a 106-103 win.

Joel Embiid had 27 points and 14 rebounds for the Sixers but and had a tying shot late blocked by Kyle Kuzma.

Danny Green hit a 3 for the Sixers with 1.6 seconds left that pulled them to 104-103. The Wizards sealed it from the line.

“I just thought we never got our offensive rhythm the entire night,” coach Doc Rivers said.

Embiid was named the Eastern Conference player of the month for a January where he averaged 34 points, 10.8 rebounds and took the Sixers to the brink of first place. Embiid, though, was flat in the first quarter, and missed 4 of 5 shots at the same time Washington made 10 of 17.

“It took us a long time to get going,” Maxey said. “We had a slow start and it was hard for us to recover.”

Nothing, though, could rattled the Wizards. They were coming of a tough 112-98 loss a night earlier at Milwaukee and showed toughness down the stretch given the back-to-back schedule and Beal’s absence.

“This is the NBA We won the other night without Joel and people don’t get that,” Rivers said. “People are like how could you lose or win those games? Because other guys on the team want to win, too. And they’re good.”