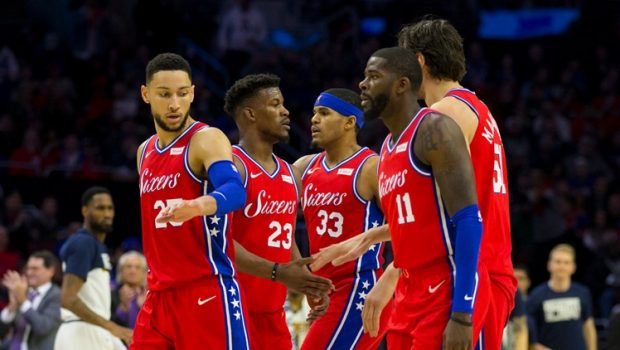 With less than a month remaining in the NBA’s regular season, most playoff teams have a good idea where they stand relative to their competitors. They’ve already clashed multiple times with the teams they could play down the road, have seen the different tactics they may use and countered them.

That’s not the case at all with the Sixers and the Milwaukee Bucks, who’ll play this afternoon in Milwaukee.

Not only have the Bucks and 76ers not played since Oct. 24, a game the Bucks won, 123-108, in Milwaukee, but both teams look decidedly different since then. The Bucks have added George Hill, Nikola Mirotic and Pau Gasol to their bench while the 76ers are on the third iteration of their team.

Only two players who started that October game are still with Philadelphia as the 76ers have refashioned themselves with blockbuster trades for Jimmy Butler and Tobias Harris to support their young star duo of Joel Embiid and Ben Simmons. In 15 games since the early-February deal that brought Harris and others to Philadelphia, the 76ers are 10-5 despite Embiid missing eight straight games in that stretch. Embiid’s return has coincided with an ongoing three-game win streak.

“It’s been a long time. It’s bizarre,” Bucks center Brook Lopez said of the nearly five-month gap between meetings. “We’ll definitely watch our film, go through shootaround, script their stuff, but at the end of the day we’re focused on ourselves and what we need to do every night.”

At 52-17 following a comeback win over the Miami Heat on Friday, the Bucks enter three games up on second-place Toronto in the East as well as the only team in the league with at least 50 wins. They clinched a playoff berth more than two weeks ago and at eight games up in the Central Division over the Indiana Pacers, are getting close to wrapping up their first division title since 2000-01.

The Bucks have already proved how they stack up against the rest of the Eastern Conference playoff hopefuls other than Philly. They’ve won the season series against the Toronto Raptors, Indiana Pacers, Boston Celtics and swept the Detroit Pistons. If the season ended today, the Bucks would boast a 17-4 record against the seven other East playoff teams.

Philly (44-25) is locked in a tight battle for third place in the conference and regardless of where it finishes could project as a future opponent.

“As far as preparation for the next step – maybe we see them in the playoffs – it’s going to be a key game,” Bucks wing Khris Middleton said. “Just to see what they do, how they’ve changed their style of play, how we match up with them and then what we can take from that these last two regular-season games against them.”

While fans and media will likely read deeply into the results of those two games, the Bucks aren’t letting on that they’ll do the same. Coach Mike Budenholzer has consistently preached a day-to-day approach, something that the players have bought into. Players conceded that the upcoming contests with the 76ers, especially Sunday’s, are big games, but they’re not necessarily going to be indicative of what could happen later.

The playoffs are a different animal and they know that. They’re taking every game seriously between now and then, but they’re also in a position where they don’t need to live and die with every moment on the way there.

As Friday’s comeback in Miami – from down 20 points at halftime to winning, 113-98 – illustrated, the Bucks aren’t content to coast to the finish line. They’re focused on the playoffs and the ultimate goal of competing for a championship, but they still have both feet planted in the present.

That’s because there’s still more to accomplish. They haven’t yet clinched the No. 1 overall seed in the playoffs or that Central Division crown. The Bucks also have a real shot at reaching the 60-win milestone, something that has only happened four times previously in franchise history and not since 1980-81.

“As a team, players, we talk about 60 wins, but what coach Bud wants from us is to get better every night,” Bucks star Giannis Antetokounmpo said. “We cannot just jump steps, you can’t go from 52 to 60. We got to get the one with Philly. We’ve got to think about the 53rd win before we get to 60.”