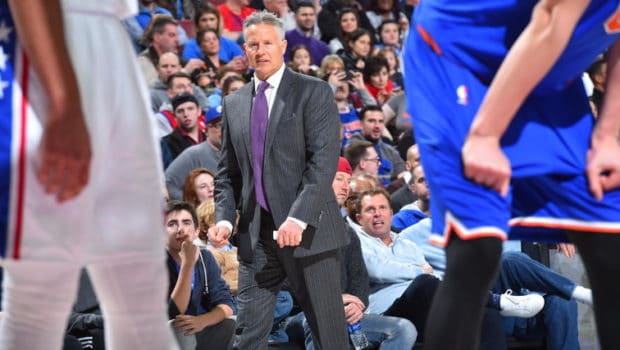 SIXERS’ BROWN SHOULD BE COACH OF THE YEAR, JASON KIDD SAYS!

The Sixers are 23-40, and coach Brett Brown has already assured fans of their top finish during his four-year tenure.

“I think he should be Coach of the Year,” said Jason Kidd, now in his third season running the Bucks. “I think he is doing a great job.”

Not only have the Sixers increased their win total significantly this year, from 10 to 23 victories so far, they’ve managed to do so in the face of significant injuries. Players who were expected to assume critical roles in the team’s rotation – Jerryd Bayless, Joel Embiid, and Ben Simmons – are all presently sidelined for the rest of the season.

“You talk about all the players that are out with injuries,” Kidd said, “but every day, he is upbeat, he’s teaching, he’s coaching, and he’s trying to put his team in a position to win.”

Two of the Sixers’ triumphs have come at the expense of Kidd and Milwaukee.

“I am a big fan of coach Brown,” said Kidd. “I think he is doing an excellent job, and once he gets all the pieces, it is going to be exciting here in Philly.”