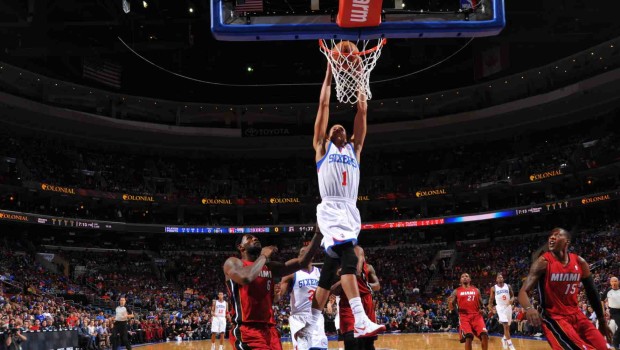 SIXERS BRINGING THE HEAT IN HOME OPENER ON NOV. 1

Can Michael Carter-Williams replicate his opening night feats against the Heat?

It is not surprising that no Sixers games made the list of “Must Watch” match-ups in the 2014-15 season.

And Anthony Gargano and Rob Ellis won’t be going game-by-game to figure out how many wins the Sixers will total, as they do when the NFL schedule is released and everyone wants to see where the Eagles fit into the league’s pecking order.

But the Sixers announced their schedule for the 2014-15 regular season last night, and there are some highlights for hoopheads to mark:

After opening at Indiana on Oct. 29, the home opener is against the four-time defending Eastern Conference champion Miami Heat on Saturday, Nov. 1. The Sixers will also host the Heat in the regular season finale on Wednesday, Apr. 15.

In addition to the games against Miami, here are some other highlights from the Sixers 2014-15 home schedule:

•Monday, Nov. 3 vs. Houston at 7:00 p.m.: All-Stars Dwight Howard and James Harden look to avenge an overtime loss on the road to the Sixers last November

Friday, Dec. 5 vs. Oklahoma City at 7:00 p.m.: Reigning MVP Kevin Durant and the Thunder make their only stop in Philadelphia

Monday, Jan. 5 vs. Cleveland at 7:00 p.m.: LeBron James returns to WellsFargoCenter as a member of the Cavaliers for the first time March of 2010

Wednesday, Jan. 21 vs. New York at 7:00 p.m.: Carmelo Anthony and the Knicks make their first trip to Philly under the guidance of team president Phil Jackson

Monday, Feb. 9 vs. GoldenState at 7:00 p.m.: All-Star Stephen Curry and former Sixer Andre Iguodala make their one and only appearance at WellsFargoCenter

Monday, Mar. 30 vs. L.A. Lakers at 7:00 p.m.: Lower Merion’s own Kobe Bryant looks to return home to play in Philadelphia for the first time since December of 2012

Wednesday, Apr. 8 vs. Washington at 7:00 p.m.: First-time All-Star John Wall and newly acquired forward Paul Pierce lead the Wizards in the battle of I-95

The Sixers open the season with two road games but will still play 14 of their first 25 at the Wells Fargo Center from Oct. 29 through Dec. 19. That includes two four-game homestands from Nov. 1 through Nov. 7 and Nov. 24 through Dec. 1.

Following that stretch, the Sixers will play 12 of their next 18 games at home from Feb. 7 through Mar. 20, including a season-high five straight from Mar. 6 through Mar. 14. The Sixers have two sets of back-to-back home games during this span (Mar. 6-7 vs. Utah and Atlanta and Mar. 13-14 vs. Sacramento and Brooklyn).

The Sixers will have 10 days between games from Feb. 10 through Feb. 19 during this season’s All-Star break.