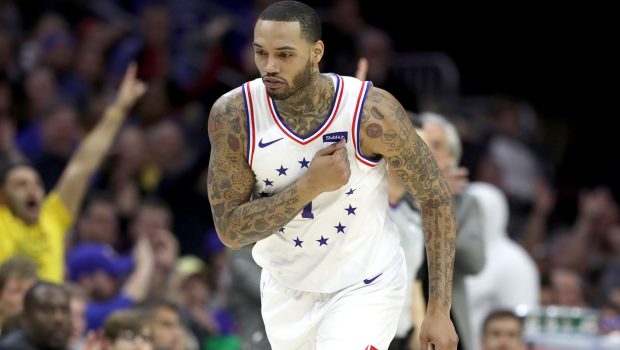 The Sixers are bringing back key reserve Mike Scott, who became a fan fave last season for his clutch 3-point shooting and his defense:

Two years and $9.8 million, a team source confirmed after Shams Charania of the Athletic and Stadium first reported the news.

Scott, who will turn 31 next month, came to the Sixers as part of the deal with the Clippers that also brought in Tobias Harris and Boban Marjanovic.

He became a leader who often stood up for his teammates.

That led to respect from his teammates and some fantastic postgame banter. Scott once said, “I ain’t no b—-“ when asked about why he got in the middle of an altercation between Joel Embiid and Bucks guard Eric Bledsoe. He also famously took a sip of a fan’s drink after diving into the crowd for a loose ball in Milwaukee. All of that endeared Scott to the fan base, inspiring the “Mike Scott Hive.”

He was also a key contributor on the court, establishing himself as the team’s sixth man as a versatile defender and reliable shooter. He was switchable on defense and at times tasked with playing a small-ball five. He also shot 41.2 percent from three in 27 games for the Sixers.