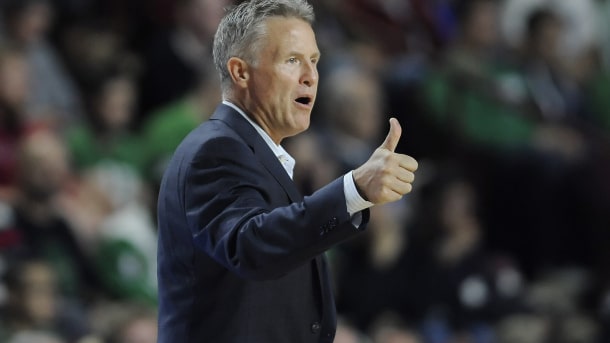 The Sixers season is over at 28-54, and coach Brett Brown is well aware of what the team needs to make the playoffs next season:

“The missing piece probably would be to put us in a time-warp and make us all 28,” Brown said yesterday of what the Sixers’ biggest offseason needs are.

“What I think to be successful is, the obvious answer is shooters. I think we really have to identify the two-guard position. I think we have to really assess Ben Simmons as a point guard, and see how that looks and feels. Everyone understands I’m committed to giving this thing a chance. I think a backup four-for Dario Saric — how can we not see what Ilyasova and Dario Saric provided as two stretch-fours.

“There’s a veteran element that you can’t dismiss. There’s examples that veterans provide. A few random bullet-points; from shooters, to watching Ben develop, to the addition of an off-guard, because I don’t see Ben guarding point guards. Who’s going to help support Ben and Jerryd Bayless? I think we need fours, and we need veterans to make the team complete.”

While Brown refused to set a wins/loss benchmark for expectations next season, he once again reiterated the importance of this summer to the team’s player development and metamorphosis from its current rebuilding state.

“Nobody has seen Ben Simmons play,” When Brown was asked what the ceiling is for this team next season. “I feel that we’re going to have far better discussions, more honest discussions [about expectations] when we all meet at the start of next year. Here’s our draft pick, here’s our free agent, here’s the summer we just had … We’re going to have a fantastic summer of development in an amazingly professional environment that we have never had before, I think then, we’re going to have some great conversations about those expectations.”