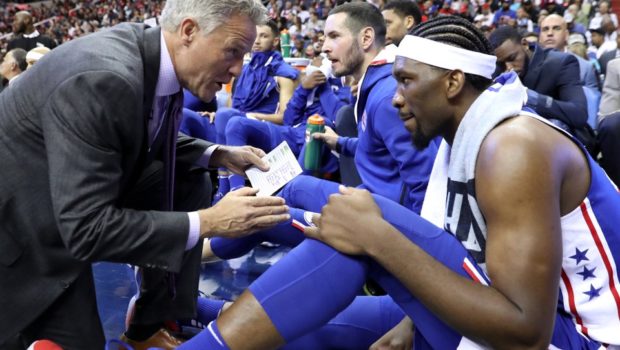 SIXERS’ BRETT BROWN MAY BE NBA COACH OF THE YEAR!

“The bar is set a little bit higher,” Sixers coach Brett Brown said. “The expectations are a little bit higher. “I want to own it. With Joel healthy, I think we should. That’s what I’m trying to do. You can’t poke yourself in the eye. Those games haunt you. And, for all those reasons, I have the reaction that I had last night that, as you accurately say, has been different in previous years.”

Ben Simmons looks like every bit the talent he was supposed to be before missing all of what should have been his rookie season last year with a broken foot, while Joel Embiid is gradually moving above 30 minutes of playing time for the first time in his career.

“I don’t think anyone expected us to come out like this, and have a strong start like this, but that’s what we expect,” Simmons said. “We come in every day trying to get better and win. That’s our goal. “We should win games like that.”

The Sixers have graduated.

Pick-and-rolls featuring Simmons and Embiid are a nightmare for opposing teams to guard, even as Simmons refuses to shoot outside of the paint – he has taken seven midrange jumpers and hasn’t attempted a single three-pointer aside from six end-of-quarter heaves – and Embiid’s conditioning and knee soreness remain issues.

Robert Covington, who is eligible for a renegotiation-and-extension of his contract today has developed into one of the best “three-and-D” players in the league. J.J. Redick has provided needed veteran experience, as well as further spacing, and Dario Saric has shown a much-needed improvement in his own outside shot, allowing him to play alongside Simmons.

Which brings us back to Brown. One of the most underrated parts of former general manager Sam Hinkie’s tenure was tapping Brown, a longtime Gregg Popovich assistant, to be his head coach.

For Hinkie’s plan to succeed, and for the Sixers to survive three or four years of losing, they’d need a coach that could endure the losses and do so while maintaining an upbeat attitude. In Brown, that’s exactly what they got.

What the Sixers also got, however, is a good coach, one whose offense is lauded by opposing teams and who managed to get his team to play hard night after night despite being on the wrong end of the result so many times.

Those days, however, are in the past. Now, it’s time for his team to win – and for excuses to end.

“I’ve seen what that looks like 12 years in a row [in San Antonio]. I can candidly say that’s not getting it done.

“So I do. It’s our barometer. I can use it as a compass. It’s our standard. It works for me, and I’m thrilled to own it.”

Now he, and his team, just have to do it.