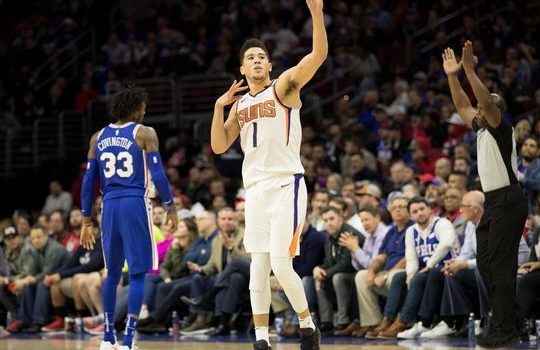 Or the Booker Look.

However you describe it, Devin Booker worked his magic on the Sixers last night.

By the end of Phoenix’s improbable 115-101 victory, Booker had a season-high 46 points.

Not close to his 70-point explosion in Boston last March. But good enough.

That, after making just 2 of 11 shots in the first quarter.

The Suns beat a Sixers team that has two of the league’s best young players in Joel Embiid and point guard Ben Simmons and, incredibly, never trailed after the first quarter.

Booker scored 42 points in the final three quarters, making 15 of 21 shots. His 10 games of 30-plus points this season are the most in franchise history through 25 games and only he, Milwaukee’s Giannis Antetokounmpo and LeBron James have scored 30 points at least 10 times this season.

Embiid got his numbers, scoring 22 points with 12 rebounds and four blocked shots.

“He’s one of the most skilled bigs I’ve seen in this league,” Tyler Chandler said. “I knew I had to just make it difficult for him. I knew for us to have any chance I had to make him work.”

Simmons filled up the box score – 20 points, eight rebounds, seven assists and six steals – but he didn’t dominate the game and in the second half scored just eight points on 3-of-8 shooting.

Whenever Philly made a run, Booker answered. After the Sixers cut the Suns’ lead to seven points late in the third quarter, Booker responded with seven points in the final 32 seconds to extend Phoenix’s advantage to 10. When the Sixers got within five with 4:49 remaining, Booker scored eight points in an 11-0 Phoenix run that sealed the game.

Booker had 19 points in the fourth quarter. Philly had 22.