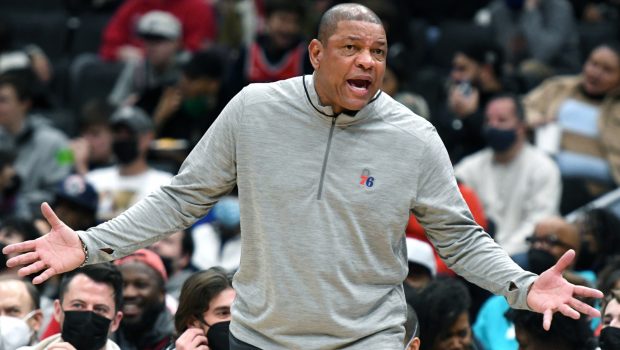 SIXERS BLEW 24-POINT LEAD, THIN-SKINNED DOC BLOWS UP AT QUESTION ABOUT HIS COACHING!

Who knew Sixers coach Doc Rivers was so thin-skinned?

Especially after being asked if his coaching was to blame for last night’s blown 24-point lead in the loss to the Clips.

It’s not as if Rivers is a stranger to questions like that.

He has a well-documented history of blowing big leads, and over the last two seasons, five of the eight biggest blown leads in playoff games belong to Doc.

After the LA Clippers collapsed in the bubble, Rivers became the only coach in NBA history with three different blown 3-1 leads.

Last night, he added to his long list of blown leads, letting a 24-point cushion slip away at home against a Clippers team that was missing Kawhi Leonard and Paul George.

Despite all of his recent failures, Doc Rivers wants his respect. After the game, Doc was asked by Austin Krell of USA Today what about this loss could be attributed to coaching.

He answered by saying, “Would you ask Pop that question? No you wouldn’t. So don’t ask me that question. I’ve earned that.”