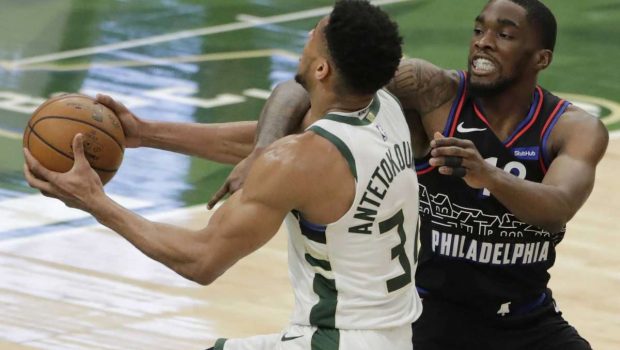 SIXERS BIGGEST THREAT IN EAST? IT’S THE BUCKS, NOT THE NETS!

The conventional wisdom is that the Brooklyn Nets pose the greatest threat to the Sixers to come out of the East and into the NBA Finals.

The CW is wrong, as usual.

It’s the Milwaukee Bucks, and they showed why last night.

Giannis Antetokounmpo scored 27 points and Khris Middleton had 24 as the Bucks defeated the visiting Sixers 124-117.

Milwaukee never trailed and led by as many as 21 for their fourth straight win over Philly.

Joel Embiid scored 24 points for the Sixers. Shake Milton had 20 off the bench.

The Bucks, who hadn’t played since Monday, improved to 36-22 and hold the third seed in the East. The Sixers, playing for the fifth time in eight days, fell to 39-20 and into a tie with idle Brooklyn for the top spot. Philly plays in Milwaukee again Saturday.

The Sixers got closer to full strength with the return of two starters. Tobias Harris, who has been dealing with a right knee issue, came back after missing three games. Seth Curry, who missed Wednesday’s game with left hip flexor soreness, also returned to the lineup.

Another starter, Ben Simmons, one of the league’s top defenders, missed a third consecutive game with an unspecified illness.

The Bucks maintained a double-digit lead throughout the second quarter and led 77-60 at the half on 66% shooting. Middleton had 21 first-half points.

The Sixers cut the lead to nine with 2:51 left in the third, but the Bucks closed the quarter with a 14-2 run, sparked by three straight 3-pointers by Portis, to lead 108-87.

The Sixers pulled within six points with 7 seconds remaining in the game against the Bucks reserves, prompting Milwaukee coach Mike Budenholzer to reinsert his starters to close out the game.