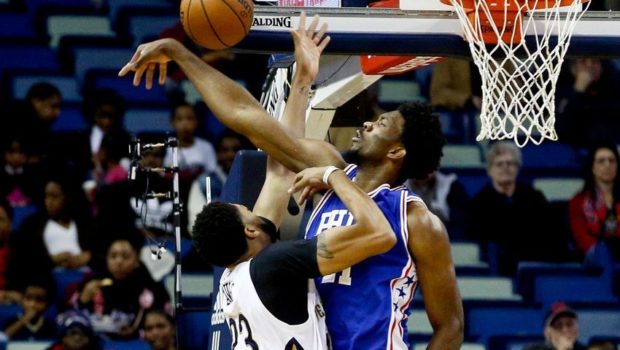 The NBA is flush with cash, thanks to the billions the networks have doled out.

And, don’t you know, the Sixers are getting good just under the deadline because the new pact, announced yesterday with the NBA players association, keeps the split at 51-49% for players and owners, respectively, gives the advantage to teams with stars:

Such as Joel Embiid (above), Ben Simmons, Jahlil Okafor and even Dario Saric!

The biggest mistake the league made during negotiations on the last CBA was changing the rules on veteran extensions so as to make them unpalatable in most cases. At the time, owners were responding to the way Carmelo Anthony forced his way out of Denver in time to sign an extension with his new team, the New York Knicks. They hoped making players wait out free agency would lead them to re-sign with their current teams, who could offer longer contracts and bigger raises.

Instead, the stars who got to free agency rather than signing extensions often chose to sign elsewhere — including LaMarcus Aldridge, Dwight Howard and, most recently, Kevin Durant — leaving their teams with nothing in return.

So veteran extensions are back in favor. Stein reports that the CBA has added an exception (the “designated veteran player exception,” per David Aldridge of NBA.com) allowing teams to choose one qualifying player to extend so their contracts run a total of six years in some circumstances — similar to the exception that allows each team to designate one player for a five-year extension of their rookie contract.

That change is particularly good news for teams trying to retain their stars. The Sacramento Kings can offer a competitive extension to DeMarcus Cousins before his contract ends after next season, as long as Cousins meets the criteria, which will include making the All-NBA team, according to a report by ESPN’s Zach Lowe. The same goes for the Indiana Pacers and Paul George.