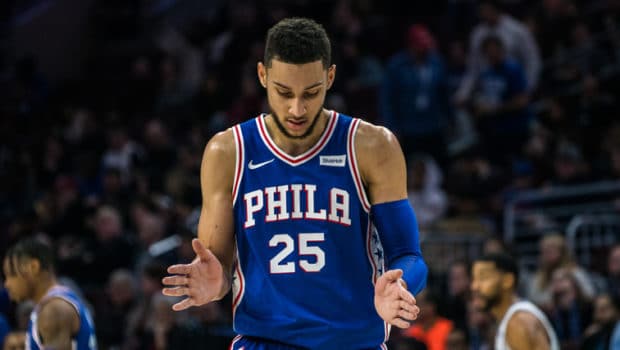 The Sixers played last night with their heads turned toward the bench, as if they were looking for Joel Embiid.

They lost a 16-point lead in the third quarter and lost to the woeful Sacramento Kings 101-95.

The Sixers appeared lost without star center Embiid — who was rested for the second straight game — at the offensive end as Ben Simmons was accused of running scared and refusing to shoot the ball when the Sixers were screaming out for someone to take control.

He only took six shots for the entire game and made five.

The Sixers were cruising with a seven-point lead after three quarters but they still lost for the seventh time in their past eight games.

Led by Zac Randolph with 27 points, Sacramento bullied Philly 30-17 in the final quarter.

At 14-16 for the season, Philly is now three wins outside the top eight teams in the Eastern Conference.

Simmons hit a tough fade away after being fouled to keep the Sixers in touch 96-92 inside the final two minutes, but missed his free-throw as Philadelphia struggled to find options at the offensive end down the stretch.

Simmons finished just one assist shy of a stunning fifth triple-double this season with 13 points, 12 rebounds and nine assists with an impressive five of six from the field.

It was his 18th double-double in his rookie year, but it was his refusal to take the game on down the stretch that left him open to criticism.

Coach Brett Brown, who had publicly called on Simmons to take more shots after their loss to Chicago, was flummoxed by Simmons’ failure to show-up down the stretch.

Simmons’ had been told before the game by Brown that he needs to start taking those mid-range jump shots that have been the biggest talking point in his otherwise dominant rookie season.

Simmons’ refusal to take open looks from outside the paint were again a hot-topic after the Sixers dropped to their sixth loss in seven games when they fell to Chicago.

He certainly responded in the first half, but then went back into his shell when the game was on the line in the fourth quarter.

Simmons shot a perfect three from three in the first half — including two mid-range jumpers from well outside the paint.

Simmons took a spell on the bench at the start of the quarter as the Sixers re-gained the lead 41-38, despite their two star players being off the court.

They extended their lead late in the first half on the back of a series of free-throws as the Kings went over their foul-limit.

Simmons also hit three of his four attempts from the charity stripe, giving him 6/7 from outside the paint in the first half, where he finished with nine points, six boards and six assists.