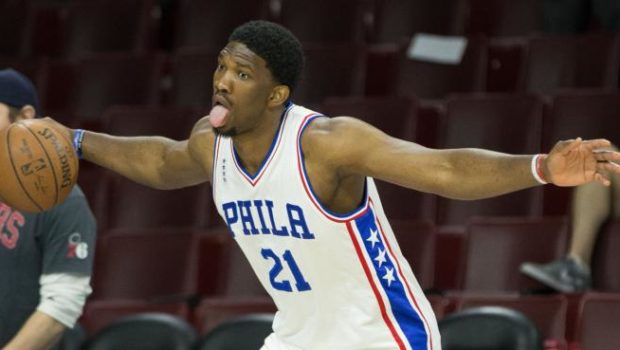 We’re still a month and a half out from Sixers training camp and two and a half from the start of the regular season, but it’s never too early to buzz about rookie of the year.

And the Sixers have two prospects, maybe three if you include Dario Saric:

Here’s how the NBA.com’s Fran Blinebury sees it:

Ben Simmons, Sixers: After three long years, all those losses, all that suffering as part of “The Process” the Sixers finally landed the No. 1 pick lottery pick stud that they’ve craved. At 6-foot-10 and 240 pounds, Simmons has the size, the passing skills and the knack for making the right play to be everything the once-proud franchise needs to come in out of the wasteland. What’s just as important is that the 19-year-old has shown a joyful, infectious demeanor and wants to lead the turnaround. Coach Brett Brown plans to use Simmons as a point forward at the start to ease his way into playing point guard. He will get the ball in his hands and have every opportunity to be the franchise player they need in Philly. Simmons showed both the flashes of what he can do and the areas he’ll need to work on during Summer League. But there’s every reason to think he’s the real deal and will put up the numbers — including wins — to be the favorite in the race among a solid crop of rookies.

Buddy Hield, New Orleans Pelicans: If it’s about filling up the hoop and scoring points, then “Buddy Buckets” will get his chance to shine in his first year in New Orleans. Perhaps no other teammate needs somebody to score from the outside to take the pressure off this season more than All-Star big man Anthony Davis. With Ryan Anderson and Eric Gordon both gone via free agency, coach Alvin Gentry is also desperate for offense. The No. 6 pick in the Draft, Hield was the best player in college last season, averaging 25 points, shooting 45.7 percent on 3-pointers and leading Oklahoma to the Final Four. Some scouts held his age and four-year collegiate career against him, but it’s just as likely to make him more ready to step right in and contribute. He openly campaigned for the Pelicans to draft him and took an upbeat, aggressive attitude into Summer League. If his performance matches his personality, the Pelicans could bounce back from a miserable 2015-16 season to make an outside run at the playoffs and that would get “Buddy Buckets” plenty of votes.

Brandon Ingram, Los Angeles Lakers: No pressure, huh? Just the No. 2 pick in the Draft with the big offensive reputation who is stepping into the spotlight with the NBA’s most glamorous team in the first season post-Kobe Bryant. At 18. The first thing Ingram will have to do is climb over veteran Luol Deng on the depth chart and first-year coach Luke Walton won’t force the timetable. Walton also won’t treat Ingram with the disdain that his predecessor, Byron Scott, held for rookies (and that’s a very good thing). There will be so much focus on his skinny frame until Ingram fills up the hoop enough times from behind the 3-point line to remind us that there are different kinds of appetites. His ability to hit from long range will certainly make things easier forJordan Clarkson, D’Angelo Russell and Julius Randle, giving them room to drive the ball and operate around the basket, though he might surprise by taking angle to also drive the ball himself. The comparisons to Kevin Durant are, of course, quite premature. But it will fun to keep the yardstick out and measure Ingram’s progess.

Kris Dunn, Minnesota Timberwolves: Could it be back-to-back Rookie of the Year winners for the Timberwolves after Karl-Anthony Towns was a unanimous pick last season and Andrew Wiggins won in 2014-15? The first thing that has to be settled is Dunn’s place on the Timberwolves roster and whether he’ll come off the bench behind Ricky Rubio or play some in the same backcourt. Minnesota was rumored to be trying to move Rubio on draft night ahead of making Dunn the No. 5 pick and there’s no reason to think they’ll stop trying. Dunn is a pure, solid point guard with a crossover dribble that breaks ankles, a killer attitude in attacking the lane and can get all the way to the rim. He’s also an excellent passer who knows how to run a team. It’s a bit scary to think what he’ll be able to do in couple of years while running with Towns, Andrew Wiggins and Zach LaVine. Dunn’s ferocity is a perfect match with coach Tom Thibodeau and if the Wolves turn the offense over to him right, he could have a shot in the race.

Joel Embiid, Sixers (above): Why not take a flyer on a longshot? And why not make that longshot the guy who should have been competing for the award two seasons ago when the Sixers grabbed him with the No. 3 pick 2014 Draft? It’s been two long years of broken bones and foot surgeries, but the 7-foot Embiid has made progress, is cleared to make plans for training camp. If he can stay healthy, the 22-year-old would give the Sixers a combination of size, speed and athleticism that had some making comparisons to Hakeem Olajuwon when he came out of Kansas. He’s got excellent footwork, nice touch with the ball and has been a quick learner since picking up the game less than a decade ago. The Sixers would certainly have a crowd on the frontline if Nerlens Noel, Jahlil Okafor and Dario Saric all show up in camp. But a fully recovered Embiid is likely the best of them all. If healthy, he could have won the award two years ago. So why not now?