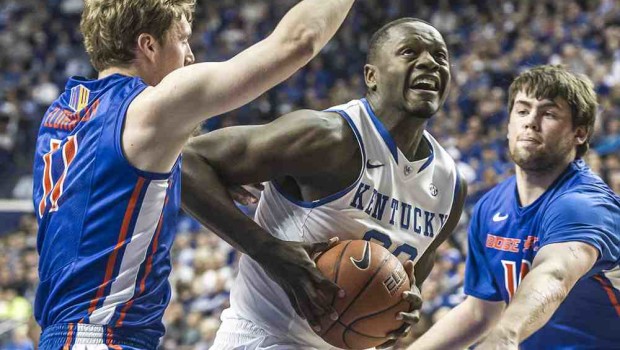 The Sixers worked out Kentucky power forward Julius Randle on Wednesday, and before they consider him for their 10th pick in the June 26 draft, they need to seriously consider what leagues sources told Adrian Wojnarowski, one of the most respected NBA reporters, at Yahoo Sports:

Randle likely needs surgery on his right foot after the NBA draft.

The procedure is expected to keep Randle out six to eight weeks this summer, sources said, but there’s a strong expectation within front offices that he’ll be cleared for the start of training camp in the fall.

In this scenario, Randle would miss rookie summer league in July.

Randle and his mother have pushed back against this report, claiming that surgery is not needed.

Randle, who is 6-foot-9, is still planning workouts with teams, including Boston today, league sources said.

As a high school senior in Texas two years ago, Randle missed three months with a fractured right foot. There was a screw placed into his foot that needs to be removed as a precautionary procedure, sources said. Randle hasn’t experienced pain in the foot, nor did he miss any games because of it in an All-America freshman season at Kentucky.

His draft stock isn’t expected to be impacted because of the surgery, league executives said. Several executives said they considered this a minor issue

“He could drop some in the first round, but I don’t think it will be because of the injury,” one Eastern Conference official said.

Most teams were informed of Randle’s status at the pre-draft combine in Chicago in April, but some had prior knowledge of the medical condition.

Randle was a third-team All-American for Kentucky and the Southeastern Conference Rookie of the Year. He’s considered one of the most tenacious and skilled inside players in the draft class.