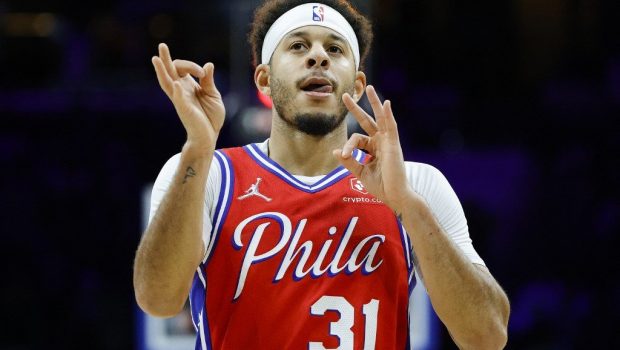 SIXERS BETTER PICK UP THE PACE AS ROAD TRIP STARTS IN INDY!

The Sixers try to snap a three-game losing streak tonight against the Indiana Pacers in Indianapolis.

They slipped from the Eastern Conference lead with losses to the New York Knicks, reigning NBA champion Milwaukee Bucks and a 115-109 defeat against the Toronto Raptors on Thursday.

Each of the three home losses came with Joel Embiid sidelined due to COVID-19 protocols.

Tobias Harris returned for Thursday’s game from health and safety protocols and recorded 19 points, seven rebounds and seven assists. The 76ers, however, remained short-handed with Matisse Thybulle under protocols and Ben Simmons yet to play this season.

“He’s another body on the floor,” 76ers coach Doc Rivers said of Harris’ return during Thursday’s postgame press conference. “The fact that he’s one of the better players helps.”

Tyrese Maxey picked up the scoring load amid Philadelphia’s struggles with depth, posting consecutive games of 31 and 33 points.

Pushing the pace could be vital to the 76ers’ chances of returning to the win column Saturday in Indiana against an up-and-down Pacers defense.

Indiana returns home for a pit stop between road trips of four and three games, the latter of which ended with a 111-100 defeat of Utah on Thursday. The loss was the Jazz’s first in Salt Lake City this season.

“Us being physical, getting into the ball, that’s what our defense is about,” Myles Turner said in his postgame press conference after Indiana held Utah to 9-of-32 shooting from 3-point range and 39-of-83 from the floor in total.

“We try to make them take tough shots and that’s something we did. We did a great job of that.”

Defensive efficiency has been a key difference for Indiana in wins and losses this season. The Pacers improved to 4-1 when holding opponents to 100 points or fewer with Thursday’s win, but they are just 1-7 when allowing 101 points or more.

Malcolm Brogdon, Indiana’s leading scorer on the season at 23.6 points per game, recorded 30 in Thursday’s win. T.J. McConnell scored in double figures for the fourth consecutive game and fifth time in the Pacers’ past six, registering a season-best 21 points off the bench at Utah.

McConnell’s been an X-factor in recent wins, scoring 18 points Nov. 7 at Sacramento and posting a double-double with 10 points and 10 assists in a Nov. 1 defeat of San Antonio.

He adds a perimeter scoring option alongside Brogdon and rookie Chris Duarte, who has debuted with a solid 14.8 points per game. The Pacers’ backcourt rotation has largely been without explosive scorer Caris LeVert this season, who has appeared in only five games and has missed the past two with a back injury.

Indiana has been without T.J. Warren for the season, but Warren could return from a foot injury as soon as late next month, per The Athletic.