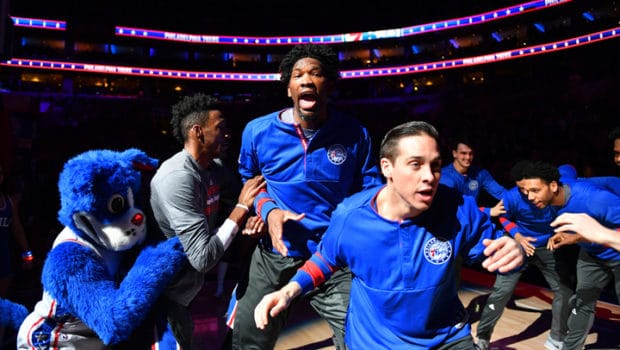 SIXERS ARE BEST-POSITIONED PHILLY TEAM FOR THE FUTURE: HERE’S WHAT THEY NEED TO DO!

Even though they only won 28 games in the recently completed 2016-17 season, the Sixers are in the catbird seat!

They return 13 players, including eight on guaranteed contracts and five with non-partial contracts, which includes Robert Covington and T.J. McConnell.

Philadelphia also has the potential to have six draft picks (two firsts and four seconds) and 2016 first-round pick Furkan Korkmaz playing in Europe, as well as potentially $40 million in cap space.

The selling points to free agents this summer are strong. Along with the foundation of Ben Simmons, Dario Saric and Joel Embiid, Philly has the cap flexibility to add two max contracts. The team improved by 18 games from 2015-16, and it could have two lottery picks (their own and Lakers’) in a very strong draft class.

The 76ers’ future is also bright because of draft assets from previous trades, including a 2019 unprotected first from Sacramento. The 76ers also have a new practice facility that is considered by many to be one of the best in the NBA.

Embiid has played just 31 games in three seasons and is eligible for a rookie extension this summer. Philly is unlikely to get disability insurance on a long-term contract that protects the team from an injury to Embiid’s right foot and left knee.

If they enter extension talks, the contract should mirror the contract Brook Lopez signed with Brooklyn. The deal would have reduced compensation by 50 percent in Year 2 and 25 percent in Year 3 if Lopez had re-injured his right foot and played in less than 60 games and averaged fewer than 15 minutes. The 76ers should not be afraid to delay contract talks until July 2018. Improved health and Embiid’s $18.3 million cap hold would give the Sixers flexibility when he is a free agent.

Since being drafted with the No. 3 overall pick in 2015, Jahlil Okafor has averaged 51 games the past two seasons because of injury, leading to a diminished role, especially when Embiid is healthy.

For an interested team, Okafor has a controllable contract with $4.9 million and $6.3 million owed the next two years and will be a restricted free agent in 2019. 76ers management should look at realistic trade scenarios for Okafor and not take into account that he was the third overall pick only two seasons ago.

There is a finally light at the end of the tunnel. Now the 76ers need health and luck in the lottery.

The health of Ben Simmons and Embiid is crucial as well as how Simmons will play at point guard next season.

The primary needs: a starter at shooting guard and insurance at power forward and center.

Though Gerald Henderson was signed to fill the shooting-guard role last summer, there is uncertainty because of Henderson’s future (June 30 guarantee date) and him being best suited for a reserve role.

At power forward, Rookie of the Year candidate Dario Saric was worth the three-year wait.

Saric, who emerged as the regular starter, had his best stretch of basketball after Ersan Ilyasova was traded to Atlanta at the deadline. While Saric’s production was a positive for Philly it left vulnerable at backup power forward.

When it comes to cap space, the Sixers once again head into the summer as the top team.

They currently have $18.2 million in space, could increase that total to $40 million once the free-agent cap holds of Sergio Rodriguez and Tiago Splitter are removed.

The 76ers also could create an additional $10 million in room if Henderson is waived before June 30 and former first-round pick Furkan Korkmaz continues playing in Europe.

The draft lottery could again dictate the future.

In a strong draft, Philly will have its own pick (currently No. 4) along with the Lakers’ first if it falls outside of the top three.

They also has the right to swap draft picks with Sacramento. Should the Kings land the top pick (or a pick better than the 76ers’), Philly can swap its own pick with Sacramento.

The Lakers’ pick will turn into an unprotected first in 2018 if not conveyed this year.

The 76ers also have the Kings’ unprotected first in 2019.

Philly will receive a first from Oklahoma City (protected Nos. 1-20) two years after Utah receives the Thunder’s first-round pick. The pick will turn into two second-round picks if not conveyed.