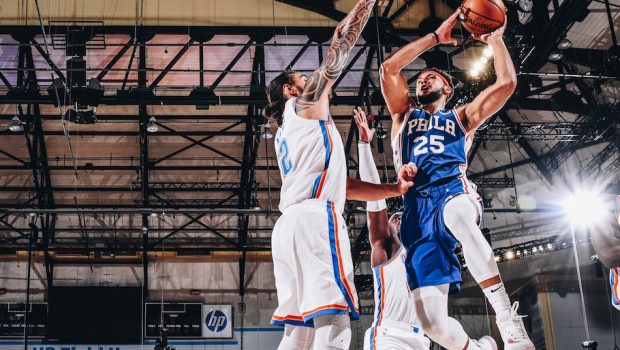 SIXERS BENNY WAS A DIME AWAY FROM TRIP-DOUB IN 26 MINUTES!

The Sixers were bounced by the OKC Thunder in yesterday’s scrimmage game.

But before resting their starters in the fourth quarter they dominated.

Although OKC’s reserves pulled through to help their team launch a fourth-quarter comeback victory, 102-97, the Sixers proved impressive for a second straight scrimmage.

In the first half, the Sixers outscored the Thunder, 55-44. They went on to by 24 in the third period before most of the Sixers’ primary rotation players exited the game.

Through the first three frames, the Sixers held the Thunder to 35.7% from the field. The Sixers shot 50% from long range (8-16 3fg) in those first three quarters.

Ben Simmons was just a dime away from a triple-double, finishing with a team-high 14 points, 11 rebounds, and nine assists in 26 minutes. Simmons also earned seven free throw attempts (4-7 FT), grabbed a steal, and was plus-21.

Alec Burks was the team’s top scoring contributor off the bench, finishing with 13 points and six rebounds.