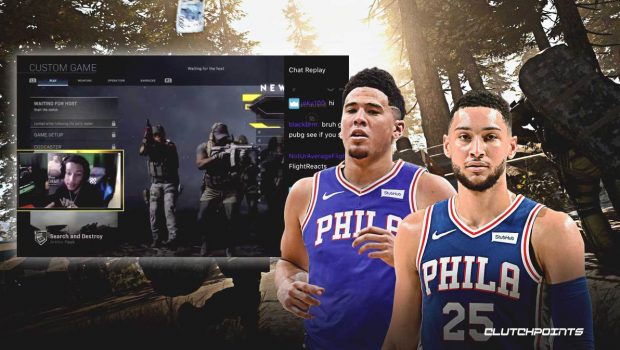 Sixers star Ben Simmons may just have been thinking or streaming out loud.

Either way, he may get fined during the NBA hiatus for tampering.

During his Call of Duty Stream, Simmons read a comment from someone who said they wish Phoenix Suns All-Star shooting guard Devin Booker was on the Sixers with Simmons.

After reading the comment, Simmons wanted everyone to know that he wasn’t tampering and was just reading a comment:

Smart move by Simmons here. Los Angeles Clippers head coach Doc Rivers was fined for tampering with Kawhi Leonard last season just for calling him the closest thing we have to Michael Jordan in today’s NBA.

Before the 2019-20 season was suspended due to COVID-19, Simmons was averaging 16.7 points, 7.8 rebounds and 8.2 assists for the Sixers. The former Rookie of the Year and now two-time All-Star was also shooting 58.5 percent from the field and 62.7 percent from the free-throw line.

The futures of Simmons and Joel Embiid are expected to be addressed by Elton Brand and the rest of the Sixers’ front office whenever the 2020 offseason begins. There has been talk about Philly possibly trading one of the two stars since they continue to be an iffy fit together.